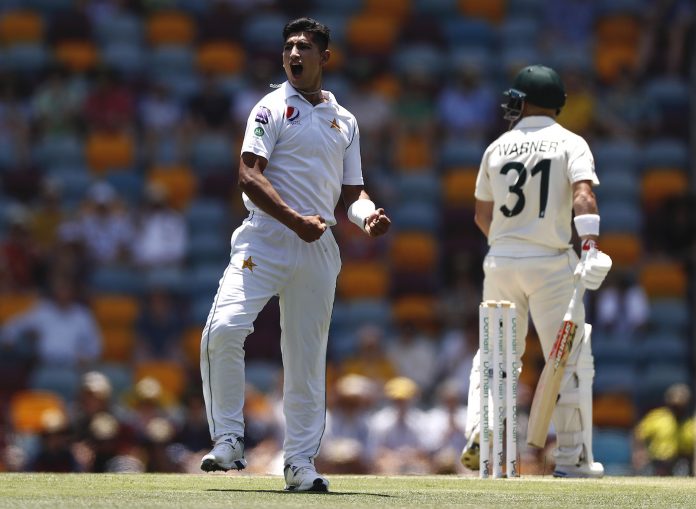 PESHAWAR: Pakistan were in a spot of bother in the first Test against Australia in Brisbane after another top-order collapse in the second innings on Saturday.

For Pakistan, Yasir Shah took four wickets, Haris Sohail and Shaheen Shah Afridi took two wickets each and Naseem Shah and Imran Khan took one wicket each. Although Pakistan took last five wickets of Australia for 35 runs, but that was too late and the damage was already done.

Naseem Shah took his maiden Test wicket by having David Warner caught behind. However, he only bowled four overs in his first spell and did not come back for bowling after that. That promoted speculations about injury concerns. Not including Mohammad Abbas in the playing eleven was also debated by the cricket experts as Pakistan’s big mistake.

Pakistan came to bat in a very difficult situation in the second innings having the daunting task of removing the first innings deficit of 340 runs. Further harm was inflicted to Pakistan when Australian pacers took three wickets for 64 runs and now Pakistan are 276 runs short in removing deficit with seven wickets remaining. Starc took two wickets and Cummins took one.

Captain Azhar Ali lost his wicket on five runs, Haris Sohail could contribute eight while Asad Shafiq was out for a duck. Shan Masood was playing on 27 and Babar Azam on 20 when the third day’s play ended.

The hosts are all set to extend their winning streak against Pakistan in home tests and in Brisbane where they have not lost a Test since 1988. Currently, Pakistan are on a losing street of 11 Tests in Australia. It is now just a matter of time for Pakistan to lose the Test and even good performance from a batsman or two can only delay the inevitable as Australia has one full innings left to bat again. But the current circumstances in the match suggest that the hosts won’t need to come again for batting.