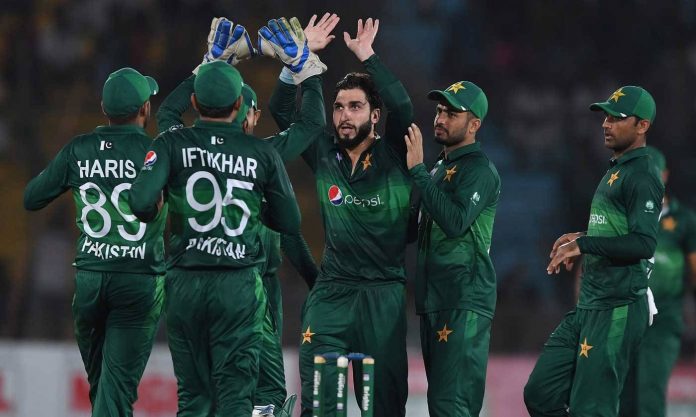 PESHAWAR: Pakistan defeated Sri Lanka by 67 runs in second match of the ODI series in Karachi on Monday and gained 1-0 lead in the three-match series.

The first match of the series was abandoned due to rain. Pakistan decided to bat first after winning the toss and posted 306 runs for the loss of seven wickets due to brilliant batting of Babar Azam who scored 115 runs. It was 11th ODI ton for Babar Azam. Fakhar Zaman also played well with 54 runs, Haris Sohail scored 40 and Imam-ul-Haq scored 31. Iftikhar Ahmed, who made comeback to the ODI team after a long time, remained unbeaten on 32 runs.

For Sri Lanka, De Silva got two wickets, while Kumara and Udana got one wicket each.

Sri Lanka had a worst start while chasing a big target and lost their first five wickets for just 28 runs. Jayasuriya and Shanaka gave some respectability to Sri Lankan score with 96 and 68 runs respectively. However, their brilliant effort was not enough and ultimately Sri Lanka lost with a margin of 67 runs.

For Pakistan, Usman Shinwari was the pick of bowlers who took five wickets, Shadab Khan took two wickets, while Mohammad Amir, Imad Wasim and Wahab Riaz took one wicket each. Usman Shinwari was declared player of the match for his brilliant bowling.

“I’ve come in after 5-6 months. It was a comeback of a sorts. It was a slow wicket, but I stuck to my plan,” Usman Shinwari said.

The third and last ODI of the series will be played in Karachi tomorrow (Tuesday).

Pakistan captain Sarfraz Ahmed said after the match that Pakistan need to improve bowling in the middle overs.

“We have to improve our lines and lengths in the middle overs. The way we batted, the score was good. The ball wasn’t coming on, our batsmen did well. We’ll try to give everyone a chance through this series, even the guys on our bench are first priority players for us,” he said.

Sri Lankan captain Lahiru Thirimanne praised the effort by Shehan and Dasun. “Disappointed how we handled the first 10 overs, it was not good enough,” he said, adding that Pakistan bowled pretty well.