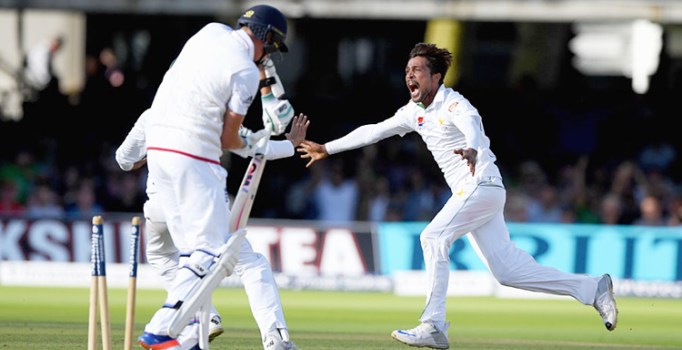 LONDON: England collapsed at Lord´s on Saturday as Pakistan closed in on a famous victory in the first test in three days.

Trailing by 179 runs on first innings, Joe Root made a battling 68 before England slumped to 111 for six at tea, 68 behind the touring side and facing a humiliating first loss in a May test at the home of cricket.

Alastair Cook, who top-scored with 70 on Thursday, was trapped lbw by Mohammad Abbas for one and Mark Stoneman, under severe pressure for his place, made a scratchy nine before he was bowled by leg-spinner Shadab Khan with a ball that kept low and England limped to lunch at 37 for two.

Root batted patiently, content to defend and take advantage of the rare loose balls served up by a disciplined Pakistan attack.

He reached his 50 before Mohammad Amir took centre stage with two wickets in one over. Pakistan´s left-arm seamer found the edge of Dawid Malan´s bat to dismiss him for 12 and two balls later Amir produced a brilliant inswinging delivery to bowl Jonny Bairstow and leave England in trouble at 91 for four.

Ben Stokes clipped his first ball through square leg for four and followed up with another crisp boundary but, on nine, he tried to clip Shadab through the leg-side and was well caught by the substitute fielder at short mid-wicket.

The packed crowd was stunned as Jos Buttler walked out to the middle and Root was next to go, snared lbw by Abbas and failing to get the decision overturned on review.