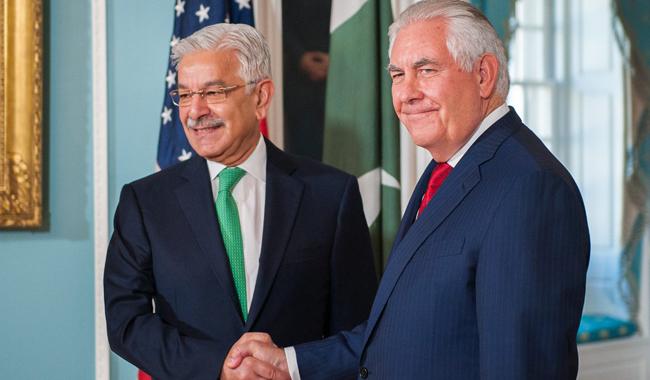 PESHAWAR, 5 October: Foreign Minister Khawaja Muhammad Asif has said Pakistan was conducting indiscriminate operations is against all militants under the policy of zero tolerance.

According to a statement issued by the Foreign Office, Khawaja Asif said this in a meeting with US Secretary of State Rex Tillerson in Washington on Thursday. The minister said Pakistan was winning the war against terrorism due to indiscriminate operations against all militants. He said Pakistan not only suffered financial losses in the war against terrorism, but it also faced worse law and order issues due to the prevailing situation in Afghanistan for the last many years.

Meanwhile, Tillerson said while talking to media that the US wants to see a strong government in Pakistan. He said the US was confident that Pakistan is its strong and trustworthy ally. He said the US-Pak ties are very crucial. He said the US new policy towards South Asia has been unveiled keeping in view the regional situation.

Meanwhile, former Afghan president Hamid Karzai said the new US policy about Afghanistan carried a message of war and bloodshed in the region.

In an interview with BBC, Karzai said he believes that this new US political strategy has some hidden conspiracy for the region. He said Afghanistan wants friendship with Pakistan, but Pakistan also needs to treat Afghanistan like a sovereign and dignified country.

He welcomed the visit of Chief of Army Staff (COAS) General Qamar Javed Bajwa to Afghanistan and hoped that it will help in restoration of peace in the region.