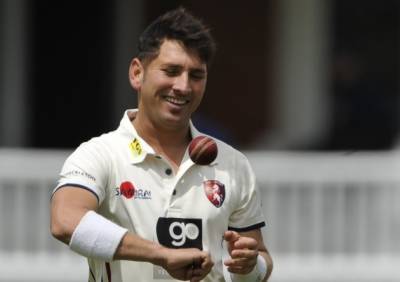 PESHAWAR:  On the 79th Pakistan day celebration, president of the country conferred the civil award – Sitara-e-Imtiaz – on Pakistan’s test cricketer, Yasir Shah and four others for extraordinary services in their respective fields on Saturday.

The awards were conferred in a ceremony held here at Governor house by the KP governor Shah Farman on behalf of the President, Arif Alvi. Three other individuals – Professor Dr Iftikhar Ahmad in the field of education, Khwaja Safar Ali in the field of Metalwork and Akhtar Gul in the field of Public Services – were also conferred with the Tamgha-I-Imtiaz

Like other parts of the country, the 79th ‘Pakistan Day’ celebrated in KP with national zeal and vowed to work for the strengthening, development and prosperity of motherland. The day started in the provincial capital with 21-cannon salute and prayers at mosques for the solidarity and integrity of the country. Rallies and functions were also organized to highlight the importance of ‘Pakistan Day’.

Different flag hoisting ceremonies were held across the province.

ISPR arranged an exhibition at Karnal Sher Khan Stadium Peshawar in which different stalls were presented in connection with March 23. A flag hoisting ceremony to mark the 79th Pakistan Day was held at provincial headquarters of Rescue 1122. The contingent of Rescue 1122 presented a salute to the national flag.

Tahafuz Pakistan event was organized at Auqaf hall by Jamaat Islami and paid rich tribute to services of founder leaders of Pakistan. Capital City Police arranged a flag car and motorcycle rally on Khyber Road Peshawar to remark the 79th Pakistan Day and create awareness among people regarding the national day of Pakistan.

The office-bearers of Chitral Union staged a rally at Qissa Khwani Bazar Peshawar to mark the day which was largely participated by the cross-section of the society. A ceremony in this connection held at Role Model Government Primary School Sherpao Colony Kohat which was attended by Advisor to Chief Minister for Education Ziaullah Bangash and others. Ziaullah on this occasion stressed upon teachers to teach the students regarding the importance of March 23, August 14, September 6 and others days celebrated in the country. 23rd March celebration took place in Timergara Dir Lower. Deputy Commissioner Dir Lower Mr Shaukat Ali Yousafzai along-with District Nazim Dir Lower Muhammad Rasool Khan hosted up the national flag and received Salami from the smart contingent of Dir Levies.

The Deputy Commissioner addressed the gathering as well where the school children performed different feats. The students threw light on the importance of 23rd March through their speeches. The national anthem, songs, poetry competition held at River beach in Atif Shaheed Park Dera Ismail Khan with was attended by Nazims, poets, civil society workers, teachers, students and others.