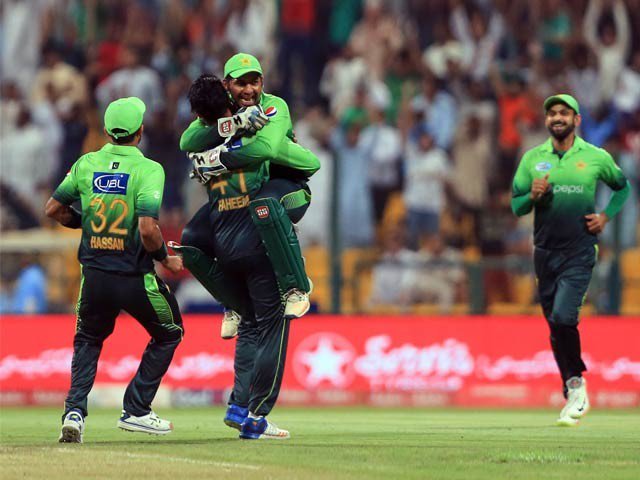 PESHAWAR, 28 October: Pakistan defeated Sri Lanka by two wickets in the second match of the T20 series against Sri Lanka at Sheikh Zayed Stadium in Abu Dhabi on Friday and gained unassailable 2-0 lead in the three-match series.

Pakistan invited Sri Lanka to bat first after winning the toss and restricted them to 124/9. Opener Gunathilaka was top scorer with 51 runs. Faheem Ashraf did a hat-trick in the 19th over, while Hasan Ali got one wicket, but the pick of the bowlers was Shadab Khan who conceded just 14 runs in his four overs and took one wicket. Faheem has become first Pakistani bowler to get a hat-trick.

Pakistani batting also tumbled in the chase. However, they surpassed the total with just one ball to spare due to little cameo of 16 runs by Shadab in just 8 balls. Sarfaraz Ahmed scored 28 runs, while Ahmed Shahzad scored 27. Perera got three wickets.

Shadab Khan was declared player of the match for his brilliant all round performance.

The last match of the series will be played in Lahore tomorrow (Sunday).