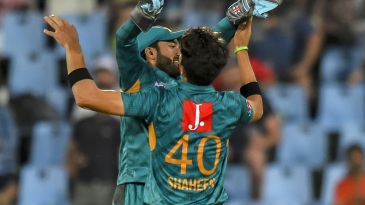 PESHAWAR: Pakistan earned consolation victory against South Africa in last match of the T20 series at the Centurion on Wednesday.

Pakistan after being invited to bat first on a good batting pitch scored 168 runs for the loss of nine wickets. Pakistan captain Shoaib Malik said he also wanted to bat first and losing the toss didn’t matter. There was no major contribution from any single batsman, however, small contributions from Babar Azam (23), Mohammad Rizwan (26), Asif Ali (25) and Shadab Khan (22) ensured a respectable total for Pakistan. Shadab Khan was very impressive with his bat as he hit 21 in the last over and scored 22 runs in just 8 balls.

While chasing the target, South Africa could make 142 runs for the loss on 9 wickets in the allotted overs and they fell short by 27 runs.

Mohammad Amir got three wickets, Shadab Khan and Faheem Ashraf got two wickets each and Imad Wasim and Shaheen Shah Afridi got one wicket each.

The batting of both the teams witnessed some soft dismissals and some fielding lapses as well.

Shoaib Malik was happy with Pakistan’s consolation win and praised the youngsters. He said PCB invested in Babar Azam which paid off. He hoped that investment will be made in more emerging players and they will also contribute in future. He said Pakistan are good in bowling resources, however, they need more batsmen like Babar Azam who can deliver on foreign pitches.

Shadab Khan said it was a good learning tour for him. He said competitive cricket was played throughout the series.