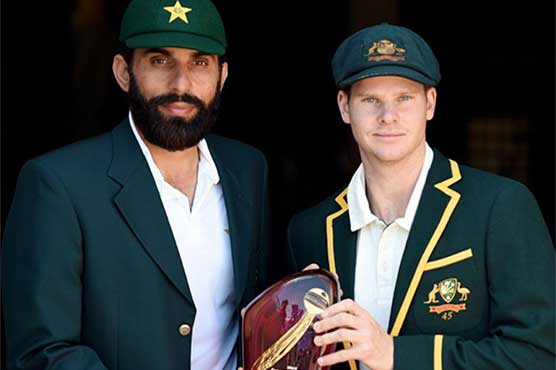 PESHAWAR, 14 December: The first Test match between Pakistan and Australia will begin at the Brisbane Cricket Ground, Gabba, on Thursday.

It will be a day-night match and will start at 8:00 am according to Pakistan Standard Time.

The Gabba pitch is one of the quickest wickets in Australia. Cricket pundits have said it would be tough challenge for the Pakistani batting line up Pakistan captain Misbah-ul-Haq has said his side will put all their efforts together to make a history by winning the series.

Talking to reporters ahead of the Thursday’s day-night Test in Brisbane, the veteran cricketer said, “he is confident the tourists can turn things around against Steve Smith’s men, who are themselves emerging from a recent losing five-Test run.”

“We have a lot of faith and confidence. The players are experienced enough and they have the belief that they can do it,” said Misbah, 42, the oldest Test cricketer at the moment.

“No doubt the conditions are tough but once you have confidence and belief I think you can change the history,” an adamant Misbah said.

No team has beaten Australia at Gabba since the West Indies in 1988, however, it will be the first day-night match at the ground with pink ball, so the tourists can pose a threat to the Australian dominance.

Leg-spinner Yasir Shah is looking to make an impact with the extra bounce from the Gabba pitch. The leggie took part in the practice session and is likely to be part of the Misbah eleven.

“He’s a wonderful bowler. He proved himself not only in the UAE but also in England,” Misbah said and hoped that he would utilize the bounce in the wicket just as Shane Warne did in past.

“We believe Yasir is the kind of bowler who can make his impact especially in Australia where bounce can play a big role during the series.”

Australia is likely to unleash an all-pace attack against Pakistan for the first day-night Test in Brisbane, the host captain Steve Smith said.

Pakistan will play three Test and five one-day internationals during the current tour.