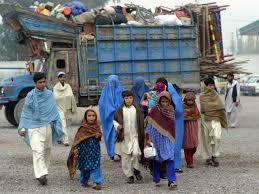 PESHAWAR, 29 June: The federal government has extended the stay of registered Afghan refugees living in Pakistan for six more months till December 31, 2016.

The extension in stay for registered Afghan refugees was approved by Prime Minister Nawaz Sharif from London.

The Prime Minister has asked the Ministry of Foreign Affairs and Ministry of States & Frontier Regions to engage with UNHCR and Afghan Government for gradual relocation of refugee camps in Pakistan to Afghanistan.

The prime minister issued the directive after seeing the ‘Repatriation and Management Policy for Afghan Refugees’, said PM Office media.

The validity period of the ‘Proof of Registration’ cards that allow Afghan refugees to stay in Pakistan  was to expire on June 30, 2016.

It is worth mentioning here that the extension in stay can be availed by Proof of Registration card holders and Afghan nationals with legal stay documents.

The spokesman of Khyber Pakhtunkhwa government Mushtaq Ghani has rejected the decision allowing Afghan refugees to stay in the country till December 31, saying that the province could not shoulder the burden of refugees anymore.

Pakistani government and security establishment deem Afghan refugees as security risk after Indian influence in Afghanistan has increased over the last few years. Pakistan blames India for being involved in anti-Pakistan activities by supporting the insurgents in FATA and Baluchistan from the soil of Afghanistan.

In a move to encourage speedy repatriation of Afghan refugees to their country, the UNHCR has increased cash aid from $200 to $400 for those families who voluntarily return to Afghanistan.