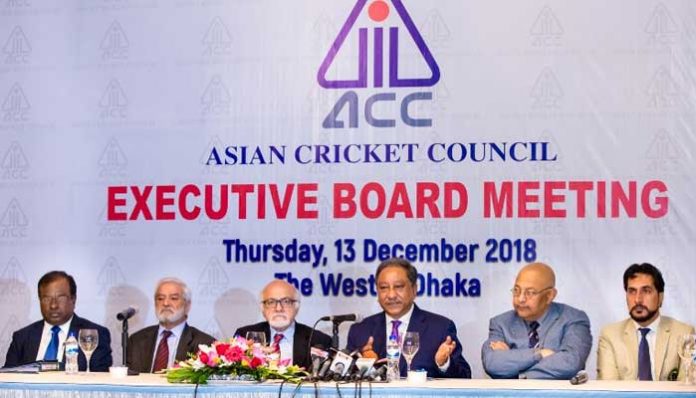 PESHAWAR: The Asian Cricket Council (ACC) has awarded the hosting rights of the next edition of the Asia Cup in 2020 to Pakistan.

Decision to this effect was taken at a meeting of the ACC Executive Board meeting in Dhaka on Thursday. However, the venues of the matches haven’t been decided yet, which will be finalised before the event.

The event will be held in September 2020 in the T20 format. In the last Asia Cup this year, India hosted the event in the United Arab Emirates due to political tensions with Pakistan. The tournament participated by Pakistan, India, Afghanistan, Bangladesh was won by India.

It is likely that the Pakistan Cricket Board (PCB) will host the Asia Cup in the UAE as India and Bangladesh may not agree to play in Pakistan due to security and political issues.

It is first time after terrorist attack on Sri Lankan cricket team in Lahore in 2009 that Pakistan has got hosting rights of such a huge event. Pakistan is currently hosting the 2018 ACC Emerging Teams Asia Cup.

Cricket has been the most played game in cities and villages of the country and it is also most watched game in Pakistan whenever the national team has to pay against rival teams, particularly India.

Being most played and watched game in Pakistan, it is however not a national game. It  is, certainly, one of the strong reasons that people in Pakistan, mostly youth, believed in Imran khan’s leadership because he led cricket team to win first-ever world cup in 1992 for Pakistan. Since then he is revered as hero by youth in the country.