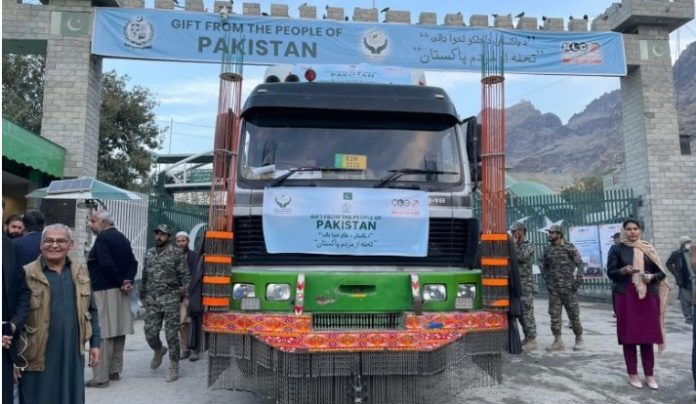 Pakistan on Thursday handed over 50 truckloads of wheat to the Taliban authorities as good will gesture for the Afghan people.

Special Assistant to the Prime Minister Arbab Shahzad handed over the wheat trucks to Afghan authorities. Afghanistan’s minister for disaster management Abbas Akhund received the trucks at the Torkham crossing.

Talking to media, SAPM said that Pakistan has planned to provide 50,000 tonnes of wheat under the directions of Prime Minister Imran Khan. He said that premier has directed to provide the wheat as good will gesture for Afghan people.

Mr Arbab said that they handed over 1,800 tonnes of wheat in 50 trucks to the Afghan authorities on Thursday.

In addition to this, he said that Pakistan will give Rs 5 billion relief package for the Afghan people. He said that package will be spent on provision of medicine, edibles, blankets and other necessities.

However, he said that if the international community did not hep Afghanistan, then the situation in the war torn country was likely to further deteriorate.

At this occasion, Mr Arbab also emphasized that Pakistan was always desirous of peace in Afghanistan. He said that peace in the Afghanistan was essential for peace and prosperity of both countries.

Afghan authorities at this occasion thanked Pakistani officials for their help.