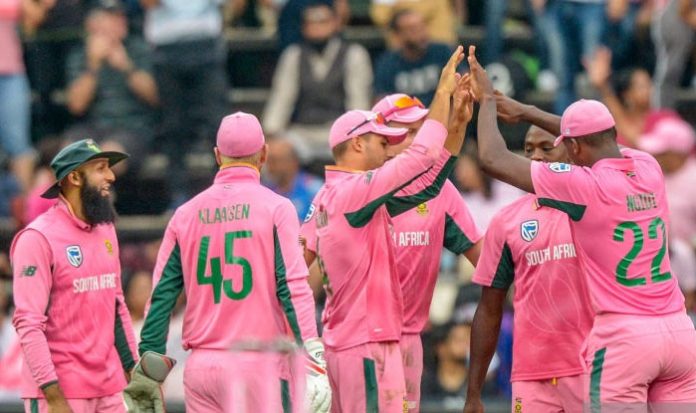 PESHAWAR: The fourth match of the five-match one-day international (ODI) series between Pakistan and South Africa will be played at the Wanderers, Johannesburg today (Sunday).

The match will begin at 1:00pm (PST). Currently South Africa are leading the series 2-1 and they will be looking to seal the series on the PinkDay. South Africa have never lost an ODI on PinkDay. Seven such fund-raising ODIs for breast cancer have been held so far, all of which were won by South Africa.

South Africa may brought back Imran Tahir in place of Tabraiz Shamsi who went for plenty in the third ODI. Further changes in the playing eleven are unlikely.

Pakistan may give ODI debut of Shan Masood keeping view his good form in the Test series. Fakhar Zaman is likely to make way for him as he is currently struggling with his form.

The Wanderers ground is known for plenty of runs and the team winning the toss will prefer to bat first and amass a big total. All the tickets for the match have been sold out.

Pakistan also scored big at the Centurion in the third ODI, but could not win because of rain. They will be hoping to end the winning streak of Proteas on PinkDay.

Pakistan has announced squad for the three-match T20 series against South Africa.

The team which played T20 series against New Zealand has been retained with just one change: Mohammad Amir has been included in place of Waqas Maqsood.

The first T20 will be played on 1 February at Cape Town, followed by second on 3 February at Johannesburg and third on 6 February at the Centurion.

Chief Selector Inzamam-ul-Haq said consistency has been kept in mind while announcing the T20 squad.