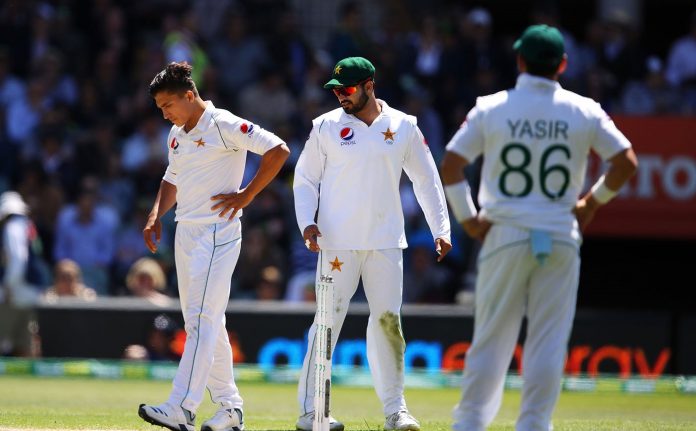 PESHAWAR: Pakistan were in all sorts of trouble at the end of second day’s play in Adelaide as they lost six wickets for just 96 six runs in response to the massive first inning total of 589/3 by Australia.

It means that Pakistan have only four wickets left and they need 293 runs more to avoid follow-on and 493 runs more to erase the first inning deficit – a task next to impossible.

Australia started the second day quite aggressively and they added 287 runs in 54 overs – just like an ODI match. David Warner fully utilized his exceptional form and also rode some luck to score his first triple century of the Test career. He remained unbeaten on 335 and could have even gone on to break the world record of 400 runs by Brain Lara, but opted against it.

In an interesting development, teenage fast bowler Musa Khan was denied his maiden Test wicket the same way Naseem Shah was denied in the Brisbane Test. And intestinally, both times, the batsman was David Warner. On the first ball of the 95th over, Warner was caught when he was playing on 226 by Babar Azam at gully. However, it emerged that Musa overstepped, although by a bigger margin than Naseem Shah.

For Pakistan, only Shaheen Shah Afridi was able to take three wickets, while rest of the bowlers remained wicketless and went for plenty. The comeback of Mohammad Abbas to the team didn’t help either.

Starc took four wickets for Australia, and Cummins and Hazlewood took one wicket each.

If Australia decided to enforce follow-on, the match can end well inside three days. Outcome of the match is like writing on the wall for Pakistan and it is just a matter of time how much the visitors will resist to delay the inevitable.