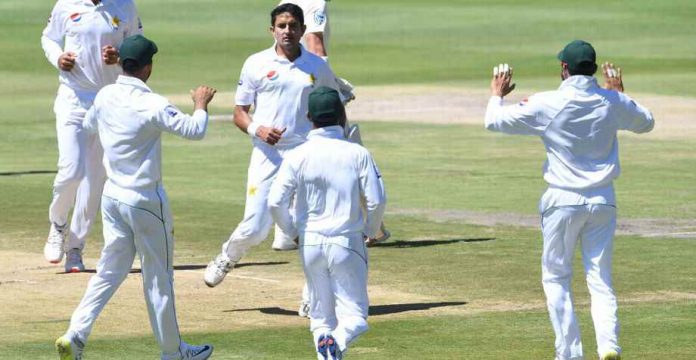 Pakistan threw away the advantage which they earned through a hard-fought effort at the end of the first day’s play against South Africa at the Wanderers on Friday.

South Africa after deciding to bat first in third and final Test of the three-match series got a solid start. Despite early loss of Dean Elgar, Aiden Mukaram (90) and Hashim Amla (41) played well and got South Africa to a solid start. The next two batsmen Theunis de Bruyn (49) and debutant Zubayr Hamza (41) also played well and it looked like Proteas will set a massive total in the first innings and then it would invite Pakistan to bat. But the situation changed dramatically after the fall of the fourth wicket and the last seven wickets fell for just 33 runs.

It meant that South Africa, who were looking extremely dangerous at 229/3, folded eventually at 262 runs. The pacers of Pakistan shared equal honours with Faheem Ashraf taking three wickets, and Mohammad Abbas, Mohammad Amir and Hasan Ali taking two wickets each. Shadab Khan, who was included in the playing eleven after resting Yasir Shah, also took one wicket.

The Pakistan captain, coach and rest of the team were looking satisfied with their belligerent performance, but that happiness proved short-lived as Pakistan in their first inning lost two quick wickets for just 17 runs. The first wicket fell on 6 runs when in-form Shan Masood nicked a delivery from Philander and on the very next delivery, Azhar Ali was also caught by the wicket-keeper. Azhar had no clue to superb bowling of Philander. Pakistan decided to send Mohammad Abbas as night-watchman to avoid further major loss and he managed to survive 13 deliveries that he faced. Imam-ul-Haq was playing on 10. Nine wickets fell in the last session of the day.

Despite restricting Proteas to a manageable total, Pakistan messed up its start and will be looking for runs from the bat of Imam-ul-Haq, Asad Shafiq, Babar Azam and Sarfraz Ahmed. Pakistan will also be hoping that two all-rounders, Shadab and Faheem, contribute with the bat to boost Pakistan’s chances in the match.