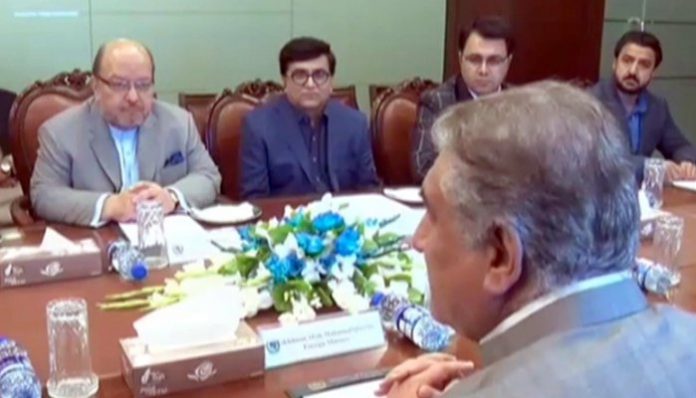 ISLAMABAD: Pakistans’ Foreign Minister Shah Mehmood Qureshi has said the government of Pakistan is making efforts for the restoration of durable peace in Afghanistan. Qureshi expressed the hope that the efforts will bear fruits.

FM Qureshi was talking with Afghan delegation here at the foreign office on Wednesday. The delegation was comprised of politicians, journalists, academics and businessmen who are in a visit to the country to discuss the peacebuilding in the war-ravaged country.

The Pakistan side assured them that they will make all-out efforts for peacebuilding not only in Afghanistan but in the whole region which is also in the larger interest of Pakistan. As for peace in Pakistan, it is necessary that there is complete peace in the region, especially in Afghanistan. During the meeting, Pakistan-Afghan relations and matters of mutual interest, including Afghan reconciliatory process were discussed.

Ambassador Khalilzad met Foreign Secretary Shah Mahmood Qureshi and other officials from the Ministry of Foreign Affairs, as well as Chief of Army Staff Bajwa and senior military officials. Khalilzad expressed his appreciation for Prime Minister Khan’s recent remarks in support of the peace process and a broader vision for stability and prosperity in the region.

The Afghan delegation members appreciated the role Pakistan has played for bringing the two sides on the dialogue table as part of the peace process. The delegation presented proposals to foreign minister for building trust between Pakistan and Afghanistan and enhancing bilateral political and economic cooperation.