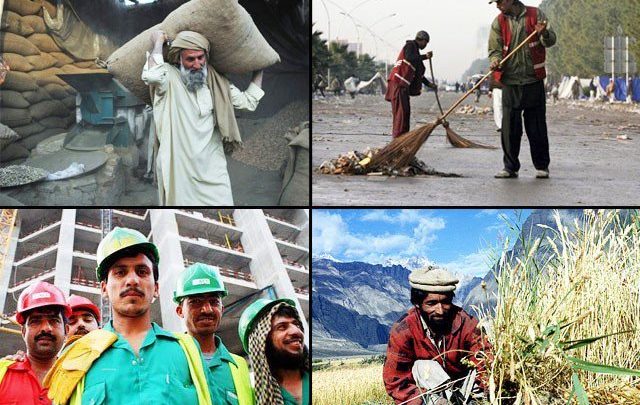 PESHAWAR: Another International Labour Day is being observed in Pakistan and rest of the world today (Wednesday) with similar glaring questions in Pakistan whether this day is for the real labourers or for the elite.

Labour Day has its origins in the labour union movement in the United States in the 19th century when the industrialists used to exploit the labour class and made them work up to 14 hours a day. The workers rose against this exploitation and demanded paid leaves, proper wages and breaks for the workforce. The eight-hour day labour movement advocated eight hours for work, eight hours for recreation, and eight hours for rest. The theme of Labour Day 2019 is “Uniting Workers for Social and Economic Advancement”.

The Labour Day annually celebrates the achievements of the workers. While the day has different story for different countries, the main reason for Labour Day is unfair treatment of the labour class.

Like many other countries, there is public holiday in Pakistan where the May Day is known as ‘Youm-e-Mazdoor’. However, it is a well-known fact that fewer labourers observe holiday on this day as they cannot afford to take a day off from their work. Workers could be seen doing hard labour on roads, markets and fields during the day.

On the other hand, the government servants, banks, bureaucrats, judges and teachers etc. observe holidays on this day in Pakistan.

In Pakistan, the day features some ceremonial statements followed by seminars, symposiums and events by government and non-government institutions.

Prime Minister Imran khan said we join global community today to commemorate the Labour Day. This historic day affords us an opportunity to recognize the valuable contribution being made by the workers for the progress and development of countries all over the world. #LabourDay pic.twitter.com/gIdkxtXqmn

Prime Minister Imran Khan in his message on the occasion of the Workers Day said this historic day affords us an opportunity to recognize the valuable contribution being made by the workers for the progress and development of countries all over the world.

President Dr Arif Alvi in his message also paid tribute to the valiant and heroic struggle of the workers for their fundamental rights.

President Arif Alvi said this year we are celebrating Labour Day with the resolve to reaffirm our commitment to the dignity of labour and to pay tribute to the valiant and heroic struggle of the workers for their fundamental rights. #LabourDay #LabourDay2019 pic.twitter.com/jpClByp2mi

Messages were also shared on the social media by different human rights bodies, world organisations and social activists about the important role the labourers play in any society.

Happy #LabourDay! Today is about advocating for workers' rights, and we're calling for an end to gender discrimination in the world of work.

Are you with us? #MayDay pic.twitter.com/2X26ZtOjpT

However, there were also some who point out the plight of labourers.

Today we pay tribute to all those who build this country with their un tiring efforts.
Nation salutes you#LabourDay pic.twitter.com/jfkn8ROQZu

Pakistan’s first labour policy was devised in 1972, in which May 1 was declared an official holiday.