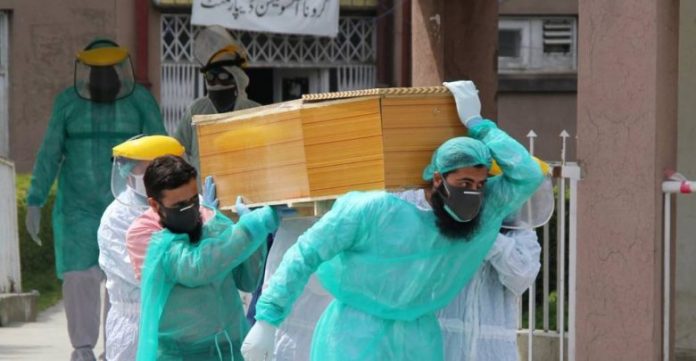 Now the total death toll in the country stands at 8,487, while infections toll is 423,179. At least 2,486 corona patients are under critical care with 336 on ventilators.

In Khyber Pakhtunkhwa, the COVID-19 case tally has risen to 50,078 as 402 new infections were reported during the last 24 hours. Six more deaths were also reported from corona in KP, taking its death toll to 1,419.

The corona positivity rate in the country has shot up to 8.58 percent with the highest COVID-19 prevalence observed in Karachi.

Corona positivity rate in KP at 9.67%

Sindh and Punjab are facing a very testing situation over growing corona deaths as both provinces reported 41 new deaths during the last 24 hours, while six deaths were reported in KP and one in AJK. Balochistan and Gilgit-Baltistan reported no new deaths.

Balochistan has reported 35 fresh cases, taking the provincial tally to 17,501.

With rapid increase in corona cases during the second wave in Pakistan, which is proving to be more dangerous than the first wave, the government has enhanced restrictions and banned public gatherings, announced vacations in schools and wedding halls are also functioning under a restricted set up. However, the government has ruled out closure of mosques and urged the Ulema to continue playing their role for creating awareness among the people about the disease.