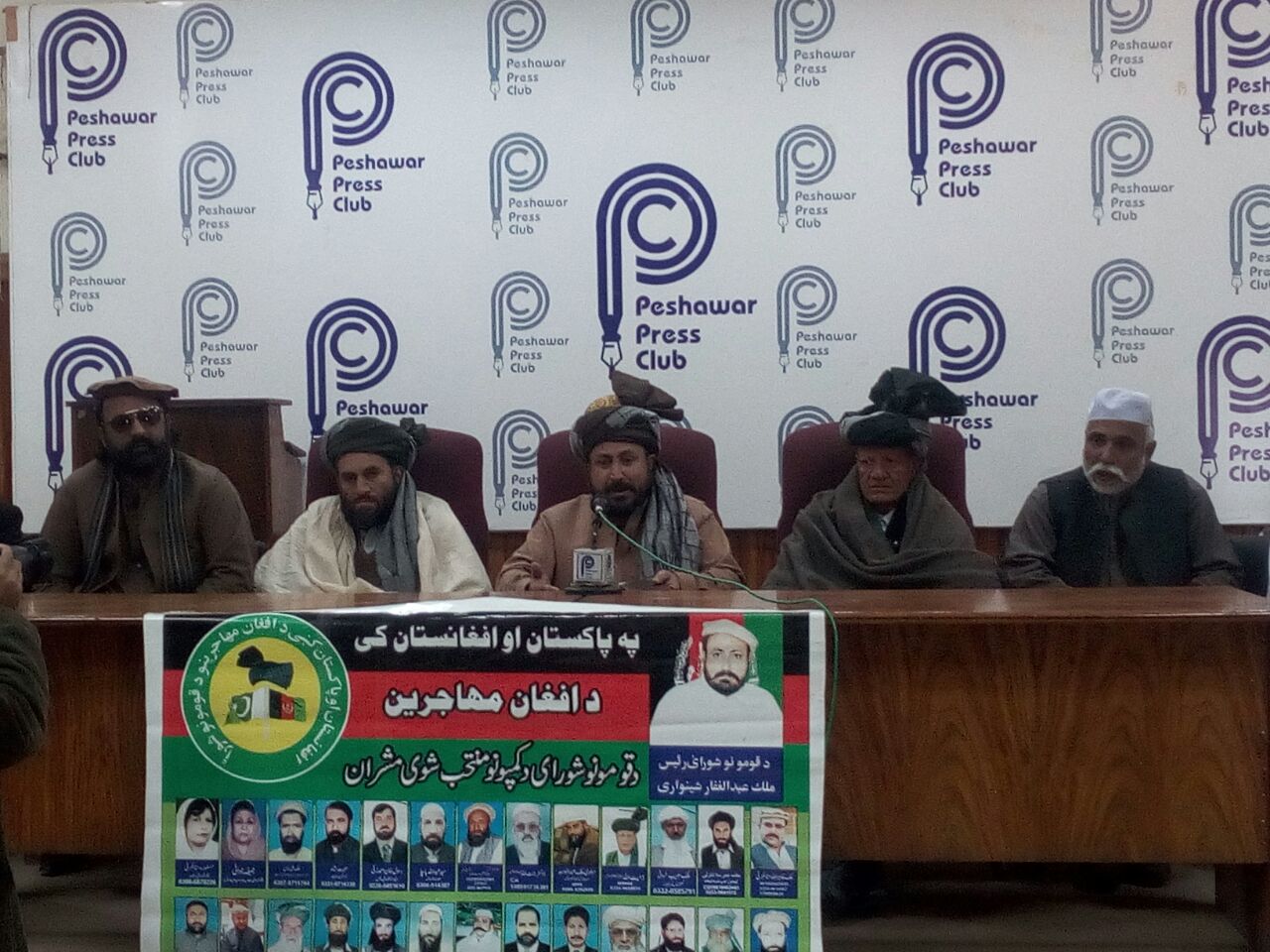 PESHAWAR, 08 January: Reacting over the recent 30-day extension by the Government of Pakistan in the legal residency of registered Afghan refugees, elders of the Afghan Refugees Shura have said it is humanly impossible for them to repatriate within the extended time period.

Speaking at a news conference in Peshawar press club here on Monday, the Shura elders including Abdul Ghaffar Shinwari, Haibat Khan Pashtun and others requested the Pakistani government to reconsider the decision and further extend their stay in Pakistan.

“The Afghan refugees have been living in Pakistan for almost four decades and have started billions of rupees businesses here. It is impossible to wind up their trades within one month period,” Shinwari said.

“The governments of the both the countries should stop doing politics over refugees. Islamabad and Kabul should chalk out an actionable plan for the respectable repatriation of the refugees,” he urged.

He said that Pakistan had formerly allowed Afghan traders to stay in the country until Dec 2019 but later, cut short the deadline to one month. “If the Pakistani government doesn’t extend our stay, we would move court against the decision,” he announced.

Shinwari suggested that the Pakistani government should enact legislation which could facilitate them in recovery of outstanding amounts before their repatriation. The government should also restrain police from harassing the refugees, he added.

Haibat Khan Pashtun said that Pakistan-based Afghan traders have incurred Rs300 million losses over a period of time, adding they would soon hold meeting with high authorities to apprise them of the problems being faced by the refugees.

“Among the 0.4 million Afghan nationals who have returned to their Afghanistan during the past few years, most of them are living in miserable conditions. The Afghan government even did not provide houses to half of them and many are still living in tents. We also requested the UNHCR to resolve our problems,” Pashtun said.

“We are not ungrateful people. We value the hospitality of the Pakistani people and government. We wish the people of Pakistan and Afghanistan live in peace like brothers,” he added.

“Pakistan should not consider us as loyalists of the United States. Had we been US supporters, we would have gone there instead of coming to Pakistan after the 1979 Soviet invasion. We preferred to come here because Pakistan is our brother Islamic country. We also have a dignity which must be honored,” he remarked.

It merits a mention here that the federal cabinet granted 30 days extension in the legal stay of Afghan refugees and decided to raise the issue of their early repatriation with UNHCR.

The ministry of Safron had suggested a one-year extension but the cabinet meeting allowed one-month extension.

The latest extension is the sixth given to the Afghan refugees by the Government of Pakistan having tripartite commitments with UNHCR and Afghan government that there would be no forced return of refugees.