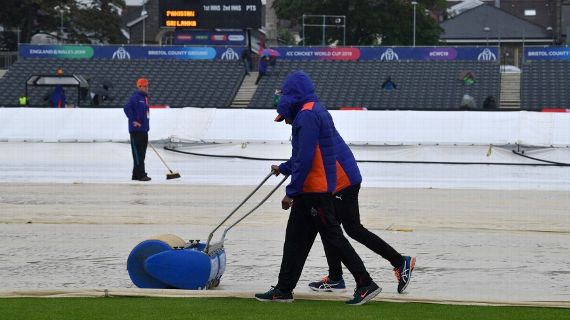 PESHAWAR: The ICC World Cup match between Pakistan and Sri at Bristol on Friday was abandoned due to persistent rain and both the teams shared one point each.

The match had to be abandoned without even the toss.

The spectators who had come to support their teams had to return in disappointment. It was a good chance for Pakistan to consolidate their position on the points table given the fact that only four teams out of ten will qualify for the semi-finals.

With draw in the Friday’s match, Pakistan have come on fourth position on the points table, while Sri Lanka have occupied third position due to better run rate. New Zealand are on top of the table followed by Australia. West Indies are occupying fifth spot followed by England, India, Bangladesh and South Africa. Afghanistan are languishing at the bottom.

Pakistan’s net run rate of -2.412is still lower than any other team due to their heavy defeat against West Indies. They will have to win next matches and that too with good margin to improve their chances of qualifying for the semi-finals.

After disappointing defeat against West Indies in the first match, Pakistan regained confidence after defeating hosts and favourites England in their second encounter. This unpredictable nature of Pakistan’s game will keep the fans and experts interested till the last game of the World Cup.

Pakistan will be particularly happy with improvement in their batting performance.

Two matches will be played in the World Cup today (Saturday). In the first match, hosts England will face Bangladesh, while in the second match, New Zealand will face Afghanistan. England have straight come under pressure after defeat at the hands of Pakistan. Bangladesh are also looking good after defeating South Africa in a crucial match and they are hoping for repeat of the same performance against other teams.