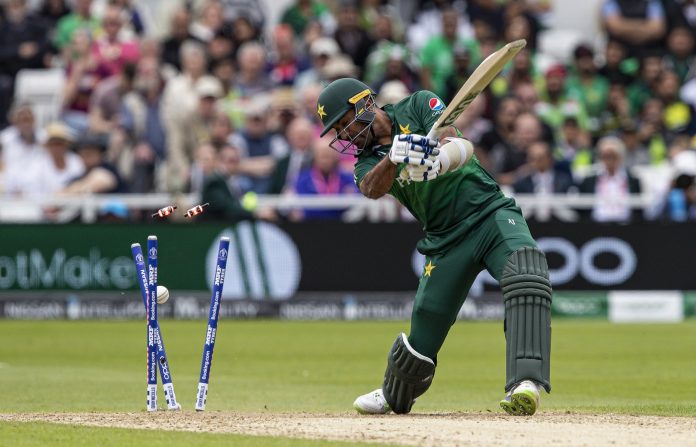 PESHAWAR: Pakistan had a forgettable start to the ICC World Cup as they lost their opening match against the West Indies by seven wickets in a one-sided match at Nottingham on Friday.

West Indies won the toss and decided to bowl first aiming to take advantage of the overcast conditions. The decision proved right as Pakistan were bundled out for 105 in the 22nd over. None of Pakistan batsmen could offer considerable resistance against the West Indies bowlers and most of them lost their wickets in ugly fashion. There were so many soft dismissals and the body language of Pakistani batsmen was very negative as they looked under immense pressure.

The top scorers were Babar Azam and Fakhar Zaman with 22 runs each, while Wahab Riaz scored 18.

The chase was just a formality for West Indies who completed the task in just 13.4 overs with seven wickets to spare. Gayle scored 50 runs, while Pooran scored 34.

The three wickets were taken by Mohammad Aamir. His return of form was the only bright spot for Pakistan in the match. No other Pakistani bowler could put any pressure on the West Indies batsmen.

Thomas was declared player of the match for his wonderful bowling.

With such a massive defeat, Pakistan started the World Cup with bottom place on the points table and horrible net run rate of -5.802.

Pakistan captain Sarfraz Ahmed said after the match that losing so many wickets early on caused defeat of Pakistan. “It was tricky for half an hour, but this is a good batting track, we didn’t bat well. I think we have to play positive cricket, didn’t do well today but hopefully we’ll bounce back,” he said.

Pakistan will play their next match against England on June 3. It will be another test of Pakistan handling the pressure as the hosts are in great form. West Indies are on top on points table followed by England. However, it’s just the start of the mega event and every team will get chance of staging comeback.