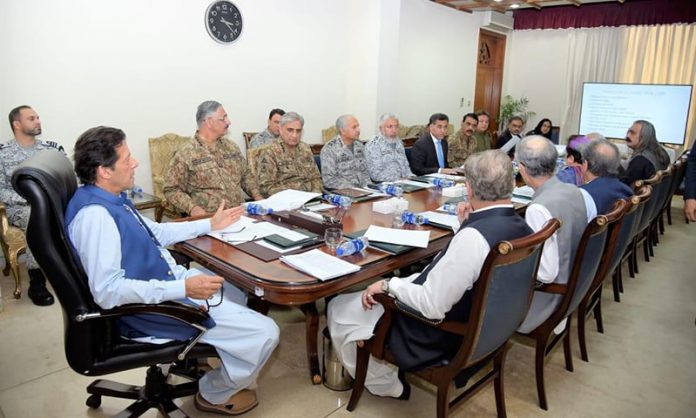 PESHAWAR: The National Security Committee (NSC) decided to downgrade diplomatic ties and suspends bilateral ties with India after its ‘illegal move’ to abolish the special status of India held Kashmir in the Indian constitution.

Within four days, today, Prime Minister Imran Khan has summoned the NSC for the second time to discuss the Kashmir issue and devise a proper strategy to counter the Indian move in Indian Held Kashmir.

During the meeting, it was also decided to take the matter to the United Nations, use all diplomatic channels to expose the racist Indian regime and human rights violations in Indian Held Kashmir. Pakistan will also observe the upcoming Independence Day in solidarity with Kashmiris.

Yesterday, the Modi government has illegally abolished Article 370 of its constitution and thus deprived the people of Kashmir’s special status as an autonomous state within India.

During the last meeting, India’s use of cluster ammunition to target the civilian population on the Pakistani side of Kashmir was discussed. It was attended by Defence Minister Pervez Khattak, Foreign Minister Shah Mahmood Qureshi and senior military officials.

Pakistan has already strongly condemned the Indian illegal move in Kashmir and called on the world to raise its voice for the people of Indian-Administered Kashmir. The PM while addressing the joint session of parliament said that the Modi government is following the Extremist ideology which intolerant to all religious minorities living in India. He said that all efforts are being made to devise a strategy and unveil the nefarious designs of Modi administration to the world.

Pakistan People Party Senator Raza Rabbani in his address to the joint session said that “If you look at it in the overall context, this is a nexus of Washington, Tel Aviv and New Delhi and, we are unable to understand this nexus.”

“Have we forgotten that when Trump mediated he gave Golan Heights to Israel?” He said that by creating the strip along the LoC, refugees would come into Pakistan through which the country would be kept under the threat of war. “Modi conquered Kashmir from the Kashmiris for the Hindus,” Raza Rabbani said. “If India continued its policy of state terrorism, there will be genocide in Indian Held Kashmir Kashmir.”