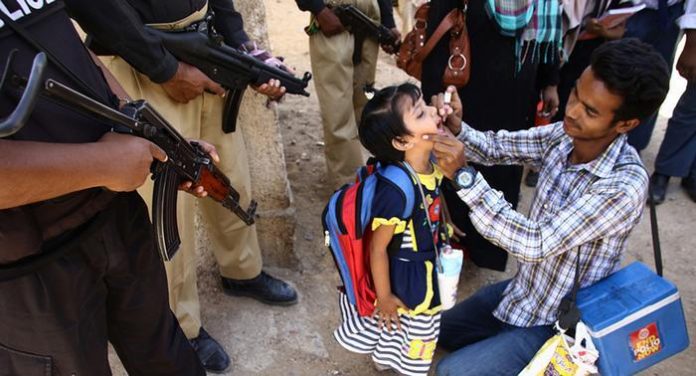 PESHAWAR: The polio vaccination campaign has been suspended indefinitely in all parts of Pakistan due to increasing attacks on polio workers and spike in refusal cases.

The National Emergency Operation Centre (EOC) for polio has communicated to the concerned departments in the four provinces, Azad Kashmir and Gilgit-Baltistan to suspend the immunisation campaign. The decision has been taken after a recent incident in Peshawar in which hundreds of children were hospitalised after consuming polio drops as rumours were spread about adverse reaction of the vaccine.

The rumours proved to be false and no such adverse thing was detected in the polio vaccine in the laboratory tests. However, these rumours caused a lot of damage as an enraged mob attacked a health centre in Peshawar and set it on fire and tens of thousands of people refused to administer polio drops to their children. Not only in Peshawar and other parts of Khyber Pakhtunkhwa, the rumours also had its impacts in rest of the country and refusal cases became a headache for the government.

The people involved in vandalism at the hospital and those spreading fake videos of adverse reaction of polio vaccine were also arrested in Peshawar. The situation was further complicated when a policeman providing security to polio vaccination team was shot dead in Bannu and another policeman was killed in Buner. That was followed by attacks on polio teams in Balochistan and Sindh. The Balochistan incident happened in Chaman where a female polio worker was killed.

The lady health workers (LHWs) also faced a tough time during the campaign as many people misbehaved with them and many workers were verbally abused. In Peshawar, enraged people entered the houses of LHWs and misbehaved with them despite knowing the fact that the workers had nothing to with ‘adverse reaction’ of the vaccine.

Anti-polio campaigns have faced immense problems in Pakistan, with refusal cases and attacks on polio teams.