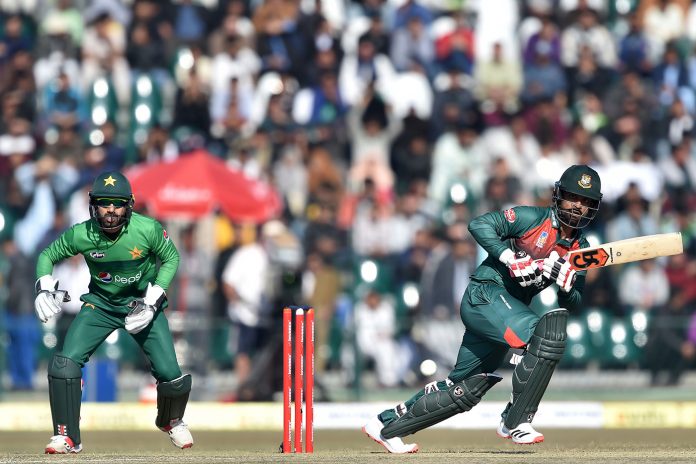 PESHAWAR: Pakistan defeated Bangladesh by nine wickets in the second match of the three-match T20 series at the Qaddafi Stadium in Lahore on Saturday and won the series 2-0.

Bangladesh again decided to bat first after winning the toss and scored 136 runs for the loss of six wickets. The visitors were again restricted by disciplined bowling by the hosts with too many dots.

Tamim Iqbal was the pick of batsmen for Bangladesh with 65 runs, Afif Hossain scored 21 and captain Mahmudullah scored 12.

For Pakistan, Mohammad Hasnain took two wickets, while Shadab Khan, Shaheen Shah Afridi and Haris Rauf took one wicket each. Pakistani bowlers were disciplined throughout and they did not allow the visitors to bat freely. Pakistan also made the most of plenty of available bowling options and used seven bowlers.

Pakistan surpassed the target in the 17th over with the loss of just one wicket. Captain Babar Azam, who was out for a duck in the first match, scored 66 and Mohammad Hafeez scored 67. The only wicket to fall for Pakistan was that of Ahsan Ali who was out without scoring.

For Bangladesh, Shafiul Islam took the only wicket, while the rest went wicket less and went for plenty.

A sharp contract was also seen in the fielding efforts of both sides as Bangladesh looked sloppy in the field with misfields and missed catches. The visitors put up some fight in the first match, but in second match they were completely outplayed and prospects for the third match for the visitors are look gloomy.

Babar Azam was declared player of the match for his brilliant batting. Pakistan will also be happy with the return of form by Mohammad Hafeez after Shoaib Malik. However, cricket experts believe that Pakistan batsmen were not challenged by toothless bowling from Bangladesh. Hafeez said after the match that he was happy to come up to the expectations of fans after return to team.

With Saturday’s win, Pakistan won the series 2-0. The next match of the series will be played on Monday at the same venue. Pakistan will have to clean-sweep the series to maintain top ranking in the shortest format of the game.