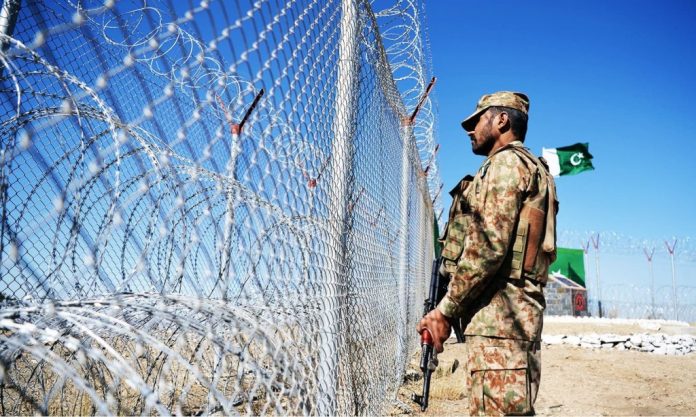 PESHAWAR: After fencing of its longest border with Afghanistan, Pakistan has decided in principle to fence its border with Iran.

This was stated by Federal Minister for Planning, Development and Reform Khusro Bakhtyar while talking informally to media. The minister said Pakistan is facing security challenges mainly due to circumstances prevailing in the neighbouring countries. He said fencing on 1,100 kilometres long border with Afghanistan should have been completed 10 years ago.

Khusro Bakhtyar said a plan to fence the Pak-Afghan border is also under consideration. He said the civil and military leadership thorough combined efforts have overcome security challenges to a great extent. He said peace in the country is vital for economic development. He said peaceful environment attracts investment.

The minister said work on Pak-Afghan border fencing is going on in full swing and it will be completed next year.

Although Pakistan is facing some problems from Afghan side over fencing the border as the Afghan government claims that the border is disputed. However, Pakistan says the border issue is settled and fencing is must to stop infiltration of terrorists from Afghan side. Terrorists often used to launch attacks from across the border after which the government decided to fence the border. However, Afghanistan raised objections over the fencing and also few border skirmishes have occurred between the two countries on the issue. Pakistan is determined to complete the border fencing next year despite difficulties.

Cross border terror attacks have significantly reduced after fencing of the border.

There is no border dispute with Iran and fencing, if started, will be a smooth affair.

A man allegedly killed his father over a trivial issue in Nowshera on Wednesday.

Police said the incident happened in Miskeenabad area where a man exchanged harsh words with his father over the issue of bringing wood and the son attacked his father with a sharp-edged weapon, killing him on the spot.

The son was escaping from the scene when he injured his head with a wood piece and he fainted. He also died during treatment at hospital. So the father and the son died the same day and the family lost two men over a trivial issue.

Police handed over the bodies of the father and son to family after post mortem.