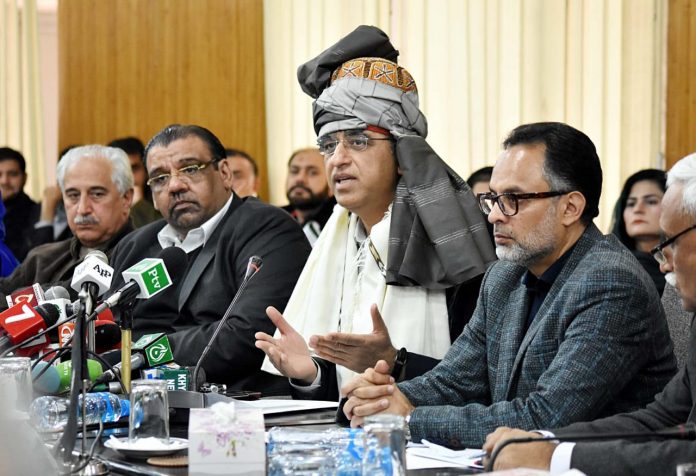 PESHAWAR: Federal Finance Minister Asad Umar on Monday said that there is a need to enhance the regional trade and improve relations with neighbouring countries especially Afghanistan and Iran in order to boost the economy.

The federal Finance Minister revealed that Pakistan is close to secure financial support from the International Monetary Fund, a day after Prime Minister Imran Khan met the IMF chief Christine Lagarde on the sidelines of the World Government Summit in Dubai.

In his address at the Sarhad Chamber of Commerce and Industry in Peshawar, the finance minister added that there is a need of a peaceful relationship with Afghanistan and therefore, the border between the two countries should remain opened round the clock to facilitate Pakistani traders.

About the Afghan peace process, he said that “Pakistan will play whatever role it can in ensuring peace in the neighboring country. “It must be clear to everyone that there can be no peace in Pakistan unless durable peace is restored in Afghanistan.”

Asad Umar said that geographical location of Khyber Pakhtunkhwa is much important in terms of establishing trade routes with Afghanistan and it should be reflected in the national economic policy.

The Finance Minister revealed that during Prime Minister Imran Khan’s visit to Turkey, last year, both the countries had agreed on working on a strategic economic framework for the enhancement of trade. “Pakistan will hand over the first draft of the framework to Turkey in February,” he said. The Turkish delegation that is working on the framework, is being led by the Turkish vice president, while the Pakistani side is being led by the finance minister himself.

“This [framework] should not just be limited to us. Our vision for the next 10, 20 years should be for Iran to become a part of this [economic framework] as well,” he said. “Iran, Pakistan and Turkey should obviously be a part of it. [Through this framework] Pakistan should become a gateway for Turkey so they can trade with India and China. And Turkey should become a gateway for Pakistan so we can trade with Europe and Central Asia states.”