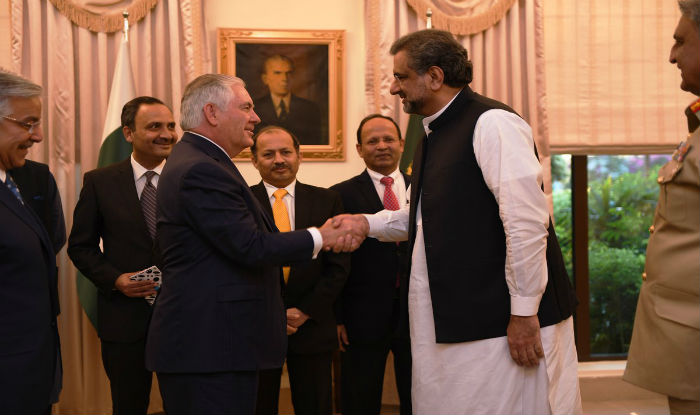 PESHAWAR, 25 October: Pakistan and the United States have agreed to maintain high level contacts and cooperation in future.

According to a statement issued from the Prime Minister Office after meeting of US Secretary of State Rex Tillerson and Prime Minister Shahid Khaqan Abbasi in Islamabad on Tuesday, peace in the region depends of resolution of Kashmir dispute. It said Pakistan want peace in Afghanistan and was taking steps to improve security at the Paki-Afghan border with its own resources.

The statement said bilateral relations and security situation in the region were discussed during the meeting. It said the US delegation led by Tillerson admired the sacrifices of Pakistan in war against terrorism.

Khawaja Asif told a foreign news channel in an interview after the meeting that trust deficit in the Pak-US relations cannot be removed overnight and it will take time. He said Pakistan lost 70,000 lives and billions of dollars in the fight against terrorism and Pakistan’s peaceful society suffered massive loss. He said efforts have been made in the right direction now to normalise the situation.

Meanwhile, talking to another channel, the minister said Pakistan has clearly told the US that there are no terror safe havens in Pakistan.