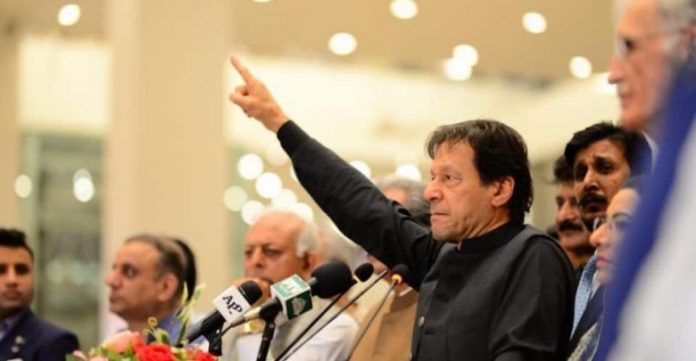 PESHAWAR: The Prime Minister Imran Khan has returned home after visit to the United States where he addressed at the united nation general assembly highlighted the Indian atrocities in Indian held Kashmir.

He was warmly received at New Islamabad Airport.

After a 7-day visit to the US, Prime Minister Imran Khan has returned from New York to Saudi Arabia and from there he flew to Islamabad. Imran was accompanied by Foreign Minister Shah Mahmood Qureshi, PM Advisor on Commerce Razzaq Dawood, Advisor to Finance Abdul Hafiz Sheikh and other important political and government figures.

On this occasion, Imran said that standing with Kashmiris is jihad, even if the world cannot take a stand with Kashmiris, Pakistan will stand. Addressing workers at Islamabad Airport, Prime Minister thanked workers for prayers that enable him to present the Kashmir cause at the UN. He also thanked Bushra Begum who prayed a lot.

PM said that Kashmiris are being oppressed, it is Jihad to stand with Kashmiri people. We are standing with Kashmiri people so that Allah will be pleased with us. He said that as long as you stand with the Kashmiris they will continue the struggle, we will not be disappointed as there are always good times after struggle. The people of Kashmir are looking at you; the people of Kashmir are looking at the Pakistani people, said the PM in his address.

PM said that I promise the nation that I will expose the fascist Modi government on every forum of the world. Imran Khan arrived in New York on September 21 to attend the UN General Assembly and delivered a speech based on four-point agenda. The nation is still busy praising it.