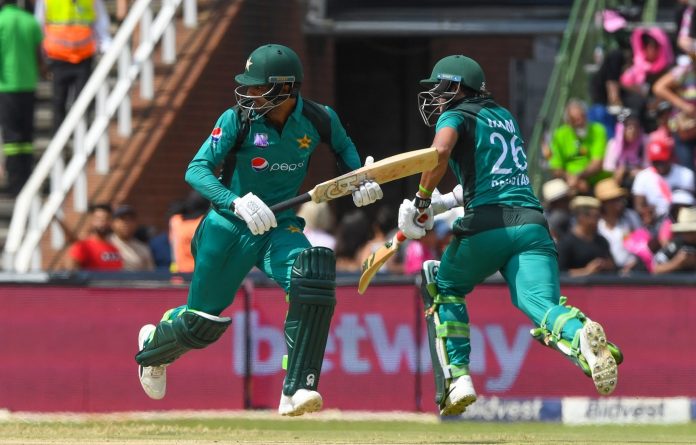 PESHAWAR: Pakistan became the first team to beat South Africa on a PinkDay at the in fourth match of the five-match ODI series at the Wanderers Stadium in Johannesburg on Sunday.

Pakistan dominated Proteas in all departments of the game and defeated them by eight wickets comfortably and levelled the series 2-2.

The visitors decided to field first and restricted the hosts to 164 in 41 overs. Except for Hashim Amla (59) and captain Faf du Plessis (57), Pakistan did not allow any of the batsmen to settle and once their partnership was broken, the rest of the team collapsed.

Usman Shinwari, who was included in the team after resting Hasan Ali, was the pick of bowlers for Pakistan with four wickets, while Shaheen Shah Afridi and Shadab Khan took two wickets each and Mohammad Amir and Hamad Wasim took one wicket each. Shinwari was declared player of the match.

Another change in the Pakistan team was that of Mohammad Rizwan who was included after a four-match ban imposed on captain Sarfraz Ahmed over his racial comments against South African all-rounder Andile Phehlukwayo during the second match in Durban on Tuesday. Shoaib Malik captained the team in Sarfraz’ absence.

Pakistan easily surpassed the target with eight wickets and 18.3 overs to spare. Imam-ul-Haq was again the pick of batsmen for Pakistan with 71. He lost his wicket when the scores were level. Mohammad Rizwan came to bat next and dispatched the first ball he faced for a boundary to take Pakistan to victory.

It is first time South Africa have lost an ODI on PinkDay. During the last seven PinkDay matches, Protest never lost a match.

Shoaib Malik was praised by commentators and experts for his wonderful captaincy skills and handling his bowlers and fielders astutely to South Africa under pressure.

Malik admired Pakistan players for showing energy and commitment in the field. He said the bowlers made the job easy for batsmen.

Du Plessis praised the Pakistani bowlers for their skills to keep Proteas batsmen under pressure. He said it was a difficult pitch, however, he admitted that batsmen needed to adopt.

The final match of the series will be played in Cape Town on Wednesday.