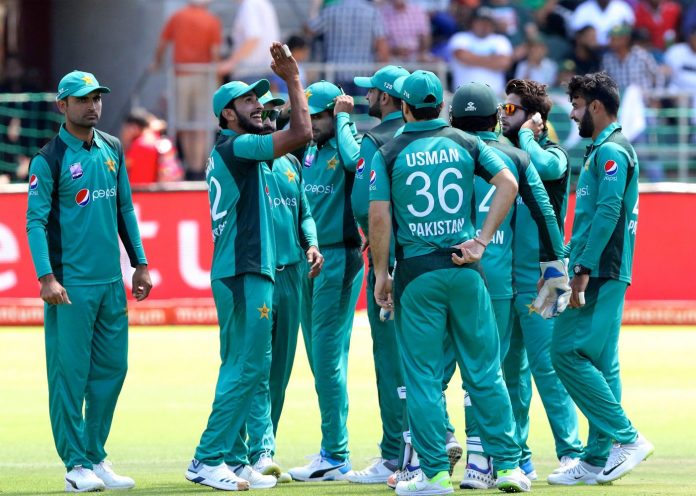 PESHAWAR: Pakistan on Saturday bounced back from the Test humiliation and posted a convincing victory in the first match of the ODI series against South Africa.

Proteas decided to bat first after winning the toss on a good looking pitch in at Port Elizabeth and posted 266 runs for the loss of just two wickets. Hashim Amla was the top run getter for South Africa with 108 runs, while Van der Dussen scored 93. Hendrick also contributed well with 45 runs.

It was Pakistan’s disciplined bowling that didn’t allow the Protease to switch gears at the end of their innings and they were confined to 266 despite a good platform and having wickets in hand. The discipline of Pakistani bowlers was evident from the fact that they conceded just 4 extras. Hasan Ali and Shadab Khan were particularly disciplined for Pakistan who took one wicket each and conceded 42 and 41 runs in their quota of 10 overs, respectively.

Pakistan took a good start in chase of the target and Fakhar Zaman fell for 25. It was followed by a good partnership by Imam-ul- Haq (86) and Babar Azam (49). Then came Mohammad Hafeez who scored 71 runs and Pakistan surpassed the target on first delivery of the last over with five wickets to spare.

A particularly encouraging aspect of the game for Pakistan was that they took Duanne Olivier for some drubbing. Although Olivier, who debuted in the ODI after taking 24 wickets in the just concluded Test series, took two wickets in his quota of 10 overs, but he conceded 73 runs in the process.

Mohammad Hafeez was declared player of the match for his brilliant batting. He said Pakistan were confident for the win as they knew 266 was not a par score on the track. He said the first win of the series was very important for the team.

“To be very honest, we were very sure as a team we should chase this one. The start given by Fakhar and Imam was brilliant, Babar gave us momentum, and it was a team effort,” he said.

Proteas captain Faf du Plessis conceded that they were 10 or 15 runs short than par sore.

With Saturday’s win, Pakistan maintain their unbeaten record at Port Elizabeth — they’ve now won three of the four games they’ve played here against South Africa, with one no result. South Africa have not beaten Pakistan in an ODI since 2013.