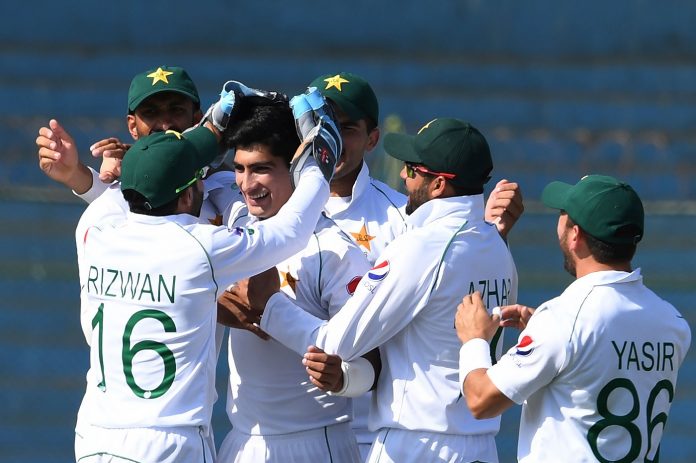 PESHAWAR: Pakistan defeated Sri Lanka by 263 runs in the second match of the two-match Test series in Karachi on Monday and won the series 1-0.

The first match of the series in Rawalpindi was drawn mainly due to persistent rain. On Monday, it only took three overs from Pakistan to claim the remaining three wickets of Sri Lanka. The visitors resumed their second inning on 212 for the loss of seven wickets while chasing a target of 476 runs. However, they could not add any run to the total and loss the remaining three wickets within three overs.

The Karachi Test saw various twists and turns as Pakistan were all out in the first innings on 191 and Sri Lanka scored 271 and got lead of 80 runs. It was the second innings of Pakistan in which Pakistan turned the tables and scored 555 runs for the loss of just three wickets before declaration and posing a mammoth target of 476 for the visitors. The target proved too big for Sri Lanka and they eventually lost by 263 runs.

In the second innings, Abid Ali, Shan Masood, Azhar Ali and Babar Azam scored centuries for Pakistan. Abid Ali was declared player of the match and player of the series for his brilliant batting. He scored century on his debut in Rawalpindi and then scored another century in Karachi.

Abid Ali said after the match that all the hard work at domestic level has been rewarded. “A home Test series after ten years, could not have been more proud. I keep working hard, keep believing in myself and remaining positive,” he said.

Captain Azhar Ali thanked Sri Lanka for giving Pakistan immense happiness by playing in Pakistan. “It had been a tough year in Test cricket for us, it was an emotional moment returning home to play. So much talent in these youngsters, experience will come with time, they are the best bowlers in Pakistan and we should back them,” he said.

With this remarkable victory, Pakistan have jumped to No.3 on the points table of World Test Championship.