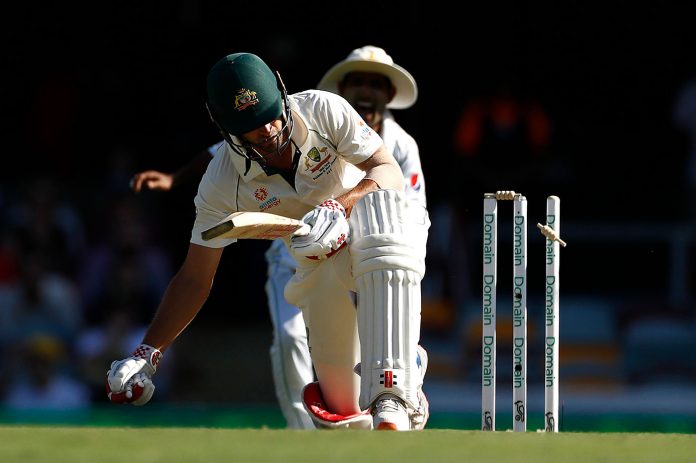 PESHAWAR: Pakistani bowlers failed to put Australia under pressure on second day of Brisbane Test as the hosts easily scored 312 runs for the loss of just one wicket in response to Pakistan’s first innings score of 240 with a lead of 72 runs with nine wickets remaining.

David Warner was the pick of batsmen for Australia as he remained unbeaten for 151 runs, while Burns was out just three runs short of century. Labuschagne was also unbeaten on 55 when the day’s play ended.

Warner also rode his luck on his way to his 22nd Test hundred. He got first reprieve when debutant Naseem Shah had him caught behind when he was playing on 56. But to the disappointment of Naseem Shah, it was a no-ball. Warner was on 93 when Yasir Shah hit the stumps directly, but he survived narrowly. And again, when Imran Khan senior was bowling his last over of the day, he hit the stumps of Warner, but so luckily for Warner, the bail remained intact. So, both Naseem Shah and Imran Khan were denied Warner’s wicket and he remained unbeaten at the end of the day’s play. It was first Test hundred for Warner after his 2017 century against England in Melbourne.

The only wicket of Burns was claimed by Yasir Shah, but the openers had already posted 222 by then. It was first double century opening partnership for Australia since November 2015, when the same pair posted 237 against New Zealand at the same venue.

Along with Yasir, it was a day of toil for Pakistani bowlers overall. Although Shaheen Shah Afridi was economical in his spells, but failed to take wicket. Part-time spinners Iftikhar Ahmed and Haris Sohail were also used, but they also proved ineffective. Pakistan may be realising that leaving out experienced and talented Mohammad Abbas to accommodate two teenage bowlers in the playing eleven was a mistake.

Pakistani batsmen failed to make the most of the flat pitch on first day of play, while bowlers also failed to put Australian batsmen under pressure and now the hosts are in a commanding position in the Test and comeback for Pakistan in the game will be not less than a miracle.