PESHAWAR: Ten students, including a Pakistani exchange student, were killed in the school shooting in Santa Fe, Texas on Friday.

According to a statement on the website of American Councils for International Education, the Pakistani student Sabika Sheikh, hailing from Karachi, was studying in the US through an exchange programme facilitated by the Kennedy-Lugar Youth Exchange and Study (YES) programme.

The gunman was identified as Dimitrios Pagourtzis, a 17-year-old junior at Santa Fe High School. He was being held on capital murder charges, which means that he could face the death penalty. The motive behind the shooting was not immediately known and the culprit was being investigated.

In a letter sent to the other YES programme students, Megan Lysaght, the programme manager (Inbound) at American Councils for International Education, confirmed Sabika Sheikh’s death: “It is with greatest sadness in my heart that I need to inform you that one of our YES students, Sabika Sheikh of Pakistan, was killed today in the school shooting in Santa Fe, Texas. Please know that the YES programme is devastated by this loss and we will remember Sabika and her families in our thoughts and prayers. We will have a moment of silence in her memory today.”

Texas Governor Greg Abbott said 10 people were also wounded in “one of the most heinous attacks that we´ve ever seen in the history of Texas schools”. 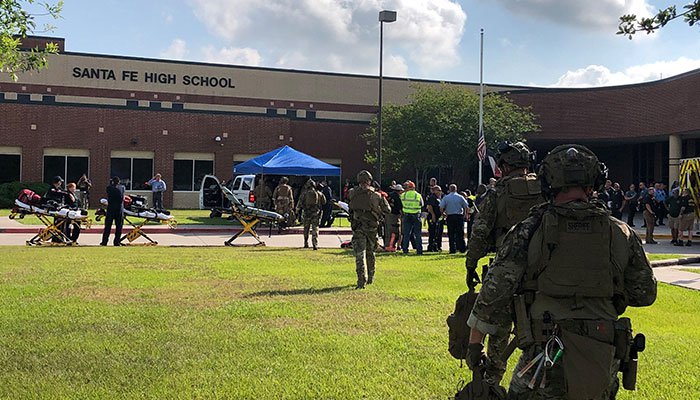 The governor said the gunman apparently carried out the attack with a shotgun owned by his father. He said explosive devices were found during search from the suspect’s house. He said the suspect had planned the shooting and planned to commit suicide after his act, but later he decided to surrender to police.

Officials said 1,400 students were present at the school at the time of the incident.

Pakistani Ambassador in the US Aizaz Ahmad Chaudhry expressed heartfelt condolences for the victims of the tragic incident.

“Among the victims was Sabika Sheikh, a Pakistani exchange student. Our thoughts and prayers are with Sabika’s family and friends,” Aizaz Chaudhry said.

The US Ambassador to Pakistan David Hale also expressed condolences to the family of Sabika Sheikh.

“This morning (Saturday), I called the family of Sabika Sheikh and offered my deepest condolences. As an exchange student, Sabika was a youth ambassador, a bridge between our people and cultures. All of us at the US mission in Pakistan are devastated and mourn her loss. We will honour her memory,” Ambassador Hale said in a statement.

“We grieve for the terrible loss of life, and send our support and love to everyone affected by this horrible attack in Texas. To the students, families, teachers and personnel at Santa Fe High School – we are with you in this tragic hour, and we will be with you forever,” he said in a message.