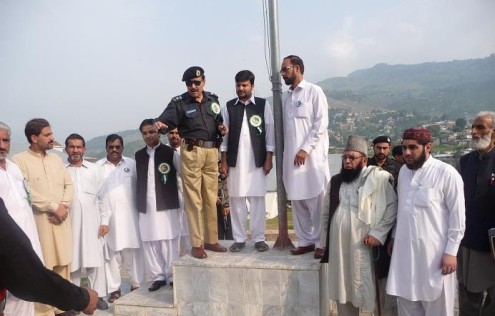 PESHAWAR, August 14: The 68th Independence Day of Pakistan was celebrated in the country with fervor.

In this connection, several ceremonies were held in different parts of the country. A ceremony was held at the Malik Saad Shaheed Police Lines in Peshawar where Chief Minister Mr Pervez Khattak hoisted the national flag.

Speaker of Provincial Assembly Mr Asad Qaiser, deputy commissioner, senior officials of the Police Department and others attended the event.

The chief minister said the nation must respect the sacrifices of forefathers for creation of Pakistan.

“It is an important day as our elders sacrificed a lot for our independence. We must work to protect our country’s sovereignty and integrity. May Allah bless us and our country,” he added.

Events were held in connection with the Independence Day in almost all districts of Pakistan.

While the nation celebrates the Independence Day on 14 August, there is a confrontation between political leaders this time and the federal capital Islamabad is under siege. The Pakistan Tehrik-e-Insaf and Pakistan Awami Tehrik have staged long march on Islamabad, as both the parties are demanding the prime minister, Mr Nawaz Sharif, to relinquish power on allegations of rigging the 2013 general elections.