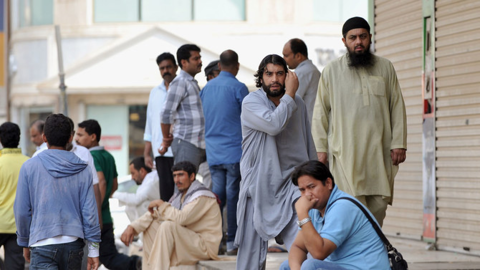 SHANGLA: Saleemur Rehman of Shangla Punyal had worked in a company in Bahrain for 15 years before returning home in January 2020 for a well-deserved break of seven months.

Within a few months of his return to Pakistan, he got a call from the company’s management. They said his visa had expired and they had no position to accommodate him in the company anymore.

According to Saleemur Rehman, the management told him that the company had run into deficit due to the COVID-19 pandemic. It was unable to renew his visa and buy ticket for him to keep his position as a storekeeper at the company.

Noorul Bashar of Guli Butt in Shangla, and Muhammad Jehan of Bankad in Kohistan also lost their jobs with the same company Banu Rama Lalmaqawalat. A construction company in Bahrain that had once 3,000 men from Pakistan, India, Bangladesh working for it, fired all employees who had gone home. Its management sent the workers their outstanding dues and fired them.

The case of Tauseef Ahmed from Shangla is not much different from Saleem. He came home on November 15, 2019 for a long vacation but then the governments suspended flights between Pakistan and Kingdom Saudi Arabia after cases of COVID-19 peaked in May-June 2020. He got stuck which caused expiry of his visa.

“After resumption of the flights operation in Pakistan in August 2020, I regularly contacted my kafeel who had promised me that he would renew my visa but he didn’t, cancelling it on August 18 this year,” he said.

Mr Tauseef was preparing for returning to KSA when he came to know about his visa cancellation on October 25 about he was not informed by his kafeel.

Muhammad Yousaf, who belongs to a rural area of the Battagram district’s Pazang and also lost his job at KSA, said that he came for seven months to home but due to suspension of flights his visa got expired and now his Kafeel asked for 16,000 KSA Riyals to buy a new visa, renewal of Iqama (work permit) and a ticket.

“I don’t have that kind of money to buy back my job,” he said.

Mr Yousaf daily goes to village to find work as daily wage labourer but returns disappointed. He wishes he could go back to Saudi Arabia but with no source of income, he could hardly put together the money required to buy even a ticket.

Overseas Pakistani migrant workers are the biggest asset of Pakistan and they are playing a vital role in the socio-economic development of Pakistan through their valuable remittances. Since 1971 till 2019, more than 11.11 million emigrants have been registered by Bureau of Emigration and Overseas Employment (BE&OE) through its seven regional offices called Protectorate of Emigrants. Out of total, more than 96 per cent concentration of Pakistani workforce is in GCC countries particularly Saudi Arabia and UAE. The SBP, mentioned in its yearly report.

According to the Bureau of Emigration Pakistan, during the entire emigration history of Pakistan, year 2015 witnessed the highest numbers when 946,571 Pakistanis were registered by BE&OE for overseas employment. Year 2016 was the second highest year when 839,353 emigrants were registered for employment abroad, though there was an 11.3% decline as compared to year 2015. Later on major decline in export of manpower was seen during years 2017 and 2018 when 496,286 and 382,439 Pakistanis were registered for overseas employment, respectively, in October 2020 after the COVID-19 pandemic the number of emigrants dropped to 183,630 which has also negatively impacted on the remittances came from foreign countries.

The pandemic was one of the reasons Pakistani emigrants lost their jobs, however, the government of Pakistan had announced financial assistance for them to included them in the Ehsaas Program beneficiaries and Overseas Pakistani Employment Corporation (OEC) has registered around 80,000 workers came to Pakistan before the pandemic and stuck here due to flights suspension.

After the deadly virus spread across the world, the Gulf countries, particularly the United Arab Emirates Federal Authority For Identity and Citizenship FAIC and Emigration and Checkpoint Authority (ICA) has launched a website in view of the COVID-19 to permit entry after providing all the details of applicant by his respective company in UAE.

The UAE-bound applicants from across the world have to check their travel status with the travel agencies offices which is either red or green, indicating whether an applicant’s ticket had been approved or not.

Usman, a worker who came to Pakistan nine months ago and now the company where he work frequently call him to reach the workplace and his visa also renewed by the company but he can’t travel due to the red status.

“My company manager in Dubai regularly calls me to visit agency and check the status. I have also sent my COVID-19 test report to the company which the company submitted to the FAIC in Dubai. I am still visiting the agency to check my travel status, to see when it would turn green,” Usman said.

Fayaz Khan, a travel agency owner in Shangla, said that he had around 30 pending cases of his UAE bound consumers whose status were red at the ICA website. He said if 30 people in a small city with one travel agency cannot travel then once could imagine the huge number of such emigrants all over the country who cannot travel to UAE due to the red status.

“Since the COVID-19 pandemic and starting of flight operation in Pakistan, the status of only four of my customers has turned green and they got tickets and travelled back to the UAE, their workplace,” he pointed out.

Guldad Khan, another travel agent in Shangla, said their business remained closed for six months and they had paid advance payment to the airlines companies for tickets which they did not return yet. He said the COVID-19 had badly affected their business and everyone lost Rs 01 to 02 million due to closure of flights, Umrah and visits.

The UAE has recently announced suspension of visit visas to Pakistan and other countries due to the second wave of coronavirus.

The State Bank of Pakistan SBP in a recent annual economy report for 2019-20, expressed its concern on forced repatriation of overseas Pakistani workers that could create grave problems for the economy. The SBP annual report provided a comprehensive account on overseas Pakistanis and possible grave situation emerging from forced repatriation of workers particularly in the Gulf region.

The report mentioned that over 100,000 overseas jobs for which the recruitment process was going on in the country was disrupted due to COVID-19 and is not going to recover unless the recruiting projects are revived.

“Around 50,000 Pakistani migrants faced layoffs in different countries. These jobs may not be recovered in the short-term and are thus extremely vulnerable,” it added.

Using data compiled by the Bureau of Emigration and Overseas Employment (BEOE), the report said that around 60,000 Pakistanis were recruited for overseas work, but could not proceed abroad due to travel restrictions and suspension of flight operations.

The report said 50,000 emigrants (Azaad visa excluded) returned on paid or unpaid leaves as of June 20. These workers have not been laid off, but their job continuation entails risk.

“A well-planned and coordinated strategy is needed at provincial and federal level to address social and economic consequences of mass repatriation and cater to the basic needs of the returned migrants,” said the SBP report.

The Pakistani emigrants have been passing through the difficult period of life lost jobs, expired visas those once sending huge remittances back to the home country and contributing to the country’s economy.