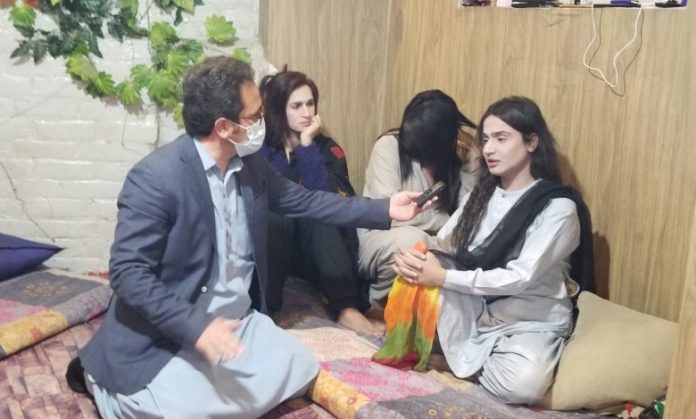 Dollar, a transgender from Peshawar, faced stark economic choices during the pandemic. The ban on marriages functions had dealt a crushing economic blow on transgender who usually danced at weddings to earn their livelihood.

Months’ long ban on functions, closure of marriage halls and other restrictions nearly brought Dollar face to face with starvation. She was left with no money to pay her flat rent despite insistence of the landlord. Dollar considered her options for days and decided to do something else to earn her earnings.

She had received sewing and embroidery training in the past and turned to the same during those depressing months.

The business has been success and she had also hired other transgender to help her with sewing and embroidery work.

Dollar’s story is not only one of its kind; rather, hundreds of other transgender also faced similar situation in the pandemic. Several transgender told TNN that they were dependent on dancing on weddings functions and other festive occasion as sole source of income.

However, pandemic related restrictions that nearly marriages and other functions to grinding halt for months, forced them to rethink their economic choices.

Imran, a transgender from Mingora, said that they completely relied on dancing to earn their livelihood. “Transgender economy is dependent on general public,” Imran said, adding that if people were facing recessions, they would also face its repercussions.

Imran said that she was forced to begging after being run out of cash during the pandemic.

Nadia Khan, president of Swat transgender said they appealed to government and NGOS for aid and edibles items during the pandemic. However, Nadia added that only NGOs helped them in the pandemic.

Dollar has also opened a handicraft center in Peshawar, where she is training other transgender in embroidery. Besides training transgender, the center also stitches women dresses, which provides her steady income.

She said that she tried to reason with other in her community about alternate sources of income. “Some transgender later joined training at the center and now they as well as I am earning money,” she said.

Besides, Dollar said she had faced sexual harassment in marriage functions in the past. “I am no longer dependent on others for my livelihood,” she said.

She also asked the other transgender to learn some skill to earn a honorable living. “You can face issue in dancing on wedding anytime,” she added.