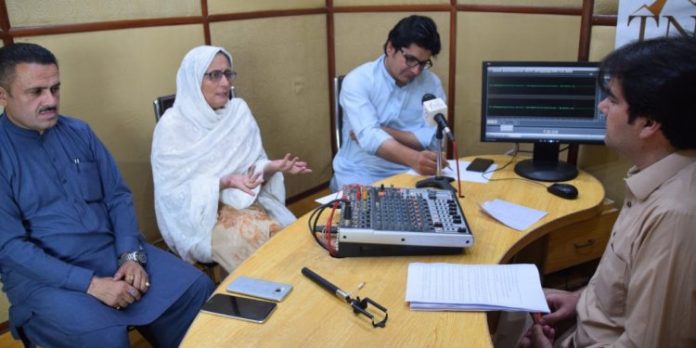 PESHAWAR: The purpose behind Insaf Rozgar Scheme is to bring the poverty ratio down in the tribal districts, which is currently at 73 percent. Initially Rs1 billion has been allocated for this pilot project.

These views were expressed by panellists in a group interview with TNN for ‘Manzal Pa Lor’ programme. Dr Nabi Afridi, head of the PTI doctors’ wing in tribal districts, Rashid Afaq, senior tribal journalist, and Ayesha Mohmand, a social activist, took part in the panel discussion.

“This scheme has been built on the principle of micro-financing. Every person, not only doctor or engineer, will be eligible for this loan. There are three categories of the loan. Professional degree holders will get loan up to Rs1 million because they need handsome money to initiate work. A doctor needs handsome money to establish clinic and engineers have similar needs for establishing laboratories,” Dr Nabi said, adding that technical diploma holders like tailoring etc. will get loan from Rs50,000 to Rs500,000.

“The common people having no degree or diploma will get loan from Rs50,000 to Rs300,000. Two guarantors, including a federal or provincial officer, will be required for the task. The loan receiver will have open choice to start any business ranging from buying eggs, hens to keeping cows with Rs300,000 loan,” he said.

Dr Nabi said the scheme has been extended to all the merged districts.

“Forms are available from the BoK, and deputy commissioner’s office and these are also available online on BoK website. The issues discussed by Ayesha Mohmand are also under consideration in the upcoming 10-year development programme. It will include technical vocational centres, skill centres etc,” Mr Afridi said.

He said Rozgar Scheme is just a single micro-finance scheme, while the 10-year programme is a mega plan in which allocations will be made for development, infrastructure, education, health, C&W, skill and vocational training centre etc. He said the sincerity of Imran Khan can be gauged from the fact that he has conducted more visits to tribal districts than his foreign visits. He said the PM visited Bajaur, Mohmand, Khyber, Orakzai and North Waziristan and he will also visit Kurram soon.

Nabi Afridi said preference will be given to educated and skilled people in the scheme as every such person has the capacity to engage at least three or more people with him as employees or partners. “The formula of ‘first come first served’ will also apply in this regard as applications will be processed as soon as they arrive with the bank,” he said.

Dr Afridi said professional degrees will get priority, after which technical, vocational and other applicants will be considered. He said the loan and priority criteria are the same for the applicants. He said the government employees can’t get this loan. He said the applicants who have already received a similar loan or he/she is supported by an institution will not be eligible.

Rashid Afaq said while taking part in the discussion that the government has also included the members from minority community and disabled persons in the scheme. “Prime Minister Imran Khan has directed that special attention must be paid to the tribal districts and the same is being done. It is definitely a good programme. In the previous such programme, some of our journalist colleagues also received loans. We are hopeful that the programme will be implemented as claimed by the government,” he said.

Rashid Afaq said loans will be given under a proper mechanism. He said the applicant will have to convince the government about his plan whether he wants to buy eggs, hens, horses or camels or he wants to open clinic, laboratory, crockery business or any other work. He said there will be a proper business plan and return will also be made accordingly.

Ayesha Mohmand said in the discussion that Pakistan belongs to all of us, not only doctors, tribals or those hailing from settled areas. “I will pray that they achieve whatever they are claiming now. However, the fact remains that the poor person will never be able to get the loan as no one will sign his documents,” she said.

She said the government should relax conditions for the lower category to enable the poor people to get the loan easily. She said education ratio is low in tribal districts and doctors and engineers are very few. “The government should have established factories with these huge funds and the children of tribal women could have got jobs in these factories,” she added.