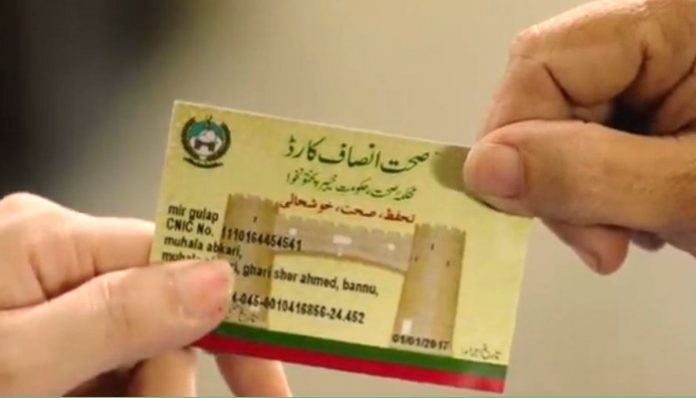 PESHAWAR: Panellists in ‘Da Manzal Pa Lor’ Programme of TNN said the Sehat Insaf Cards is a good scheme for tribal people, particularly the women and elderly people, and urged the need for inclusion of hospitals in the tribal districts in the programme.

Amanat Ali said the distribution of Insaf Cards is continuing in Bara, Jamrud and Landikotal tehsils of Khyber district.

Amanat Ali said hospitals are providing treatment of card holders. “We have formed a proper schedule for distribution of Insaf Cards at tehsil level. We have specified specific days for cards distribution among different tribes,” he said.

The distribution supervisor said Insaf Cards are being distributed in Khyber, Bajaur, FR Peshawar and Orakzai, while the process is yet to start in Mohmand district.

“The patients, who are admitted to hospital, will get free treatment under these cards. OPD is not included in the card balance, while plastic or cosmetic surgery is also excluded. Artificial limbs and treatment of diseases of teeth have also been excluded. The card will not benefit drug addicts, mental patients or those having treatment for sexual diseases. Kidney transplant has not been included, while rest of the diseases about kidney have been covered,” he explained.

Amanat Ali said Rs60,000 will be available in the Insaf Card for general surgeries and Rs300,000 will be available for patients having chronic diseases. He said hospitals in the tribal districts will be included in the list and talks have been held with concerned authorities in this regard. Al-Khidmat Hospital, which is a private health facility, in Khyber district, will also provide treatment to Health Cards beneficiaries.

The distribution supervisor said the tribal people who cannot come to Peshawar may utilise this facility in their own areas, while those who can come, my use their cards in hospitals of settled districts throughout KP. He said there is no limit to family members for using the card. He said the head of family, his spouse and all children will be considered beneficiaries.

For card extension, he said, the doctor providing treatment to the patient will issue a certificate that the patient requires further treatment after which the duration of the card will be extended. “The card will not expire in three years even if it remains unused. It will only be renewed after one year if the available balance is exhausted,” he said.

Sakina Mohmand while taking part in the discussion said it appears to be a good scheme. She said the government must make sure that every deserving person gets benefit from this scheme. She said the Health Department should specify hospitals in the tribal districts for treatment under Health Cards and these hospitals must be equipped with all facilities.

“Currently, the poor people of tribal areas are suffering a lot and they had to go through a lot of trouble while getting treatment at government hospitals. Most of the areas in tribal districts are backward and they deserve better facilities,” Sakina Mohmand said.

She said very kind of health facility must be provided free of cost to tribal women as they are the most vulnerable segment of society.

“Sehat Card must not only work in tribal areas, but it must also be effective in urban areas of settled districts because the tribal hospitals lack the facilities of surgery, kidney ailment, heart diseases and liver treatment etc. The tribal people will benefit if they get treatment facility at major hospitals of Peshawar like LRH, KTH and HMC,” she said.