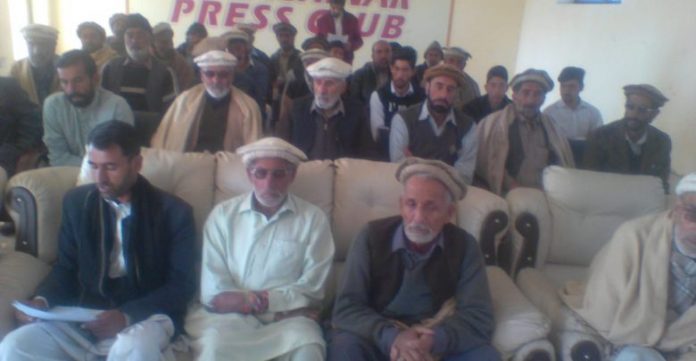 PESHAWAR: The tribal elders of Khiwas village of district Kurram on Sunday demanded the government of Khyber Pakhtunkhwa (KP) for immediate efforts for the uplift of their war-affected area.

The tribal elders were addressing a press conference at Parachinar Press club on Sunday to divert the governments’ attention towards their village. The elders said that Khyber Pakhtunkhwa government have promised at the time of the merger of tribal districts with KP that rehabilitation of war-affected area will the first priority but they lamented that so far no steps have been taken for the development of Khiwas are.

They added the government and Non-Government Organization (NGOs) should help Khivas victims like other war victims in other parts of the tribal districts. Addressing a joint press conference in Parachinar, tribal elders of Khiwas region, Haji Tahir Hussain, Mohammad Ullah, Bakht Hussein, Haji Hussein Ali Shah, Haji Murad Hussein, Inayat Hussain, Mohammad Zubair and other leaders said the area was completely destroyed due to unrest and with over 300 houses, the existing equipment has also been completely raised to the ground.

He said that government agencies have not yet provided any help to the victims of Khiwas, which is further increasing the problems of Khivas victims. The elders demanded that all the victims of Central Kurram and other areas have received assistance up to Rs 400,000 while some households get up to Rs 1 crore, but 119 families in Khiwas get only Rs 1 lakh and fifty thousand per household.

The demanded that like other the tribal districts, Khivas victims should also be assisted and the government, as well as NGOs, should rehabilitate Khiwas. They also demanded that they must be given their rights and the restore education and health facilities destroyed in the area due to unrest since 2010. They also asked for the reconstruction of roads in their area, provision of electricity and clean drinking water and resolution of other such issues in their area.