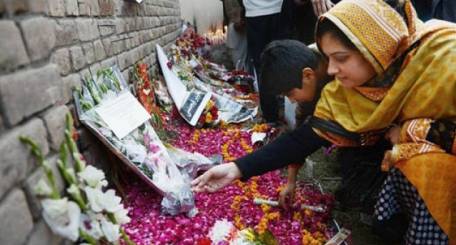 PESHAWAR, 17 May: The parents of students who lost their lives in terrorist attack on the Army Public School and College on 16 December 2014, have threatened to stage a protest in front of the Parliament House over non issuance of investigation report of the heinous incident.

Representatives of Shohada and Ghazi Forum said the Pakistan Tehrik-e-Insaf (PTI) chairman Imran Khan had promised them to unveil the culprits involved in the massacre of students. They said even the judicial commission to probe the incident has not been formed despite passage of five months.

“Our children cannot come back now. However, Prime Minister Nawaz Sharif could have at least met the parents of slain students to offer Dua for their solace,” the father of a slain student told TNN.

“I lost my two sons in the incident. The government has not fulfilled any of its promises. They should at least ensure security of our remaining children,” a woman said.

“We remember our children by seeing their pictures. Our children seem to be complaining to us that we have done nothing for them,” another mother of a slain student told TNN with tears rolling down her cheeks.

The parents of martyred students said they will hold a protest demonstration in front of the Parliament House if culprits behind the heinous crime were not shown to them within one month.

At least 141 people, including nine staff members, were killed and 121 wounded in the terrorist attack on the Army Public School.