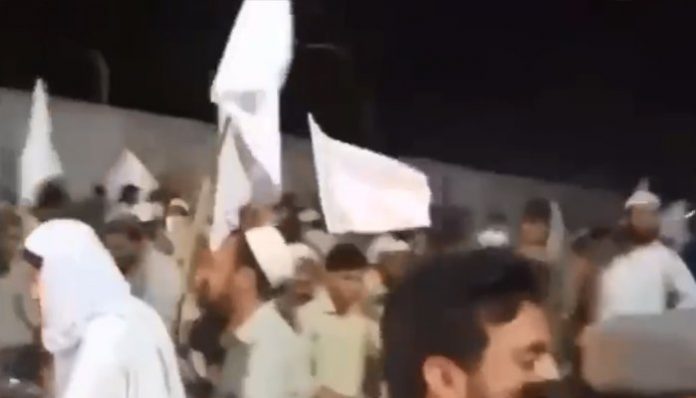 PESHAWAR: A video has gone viral on social media in which participants of a funeral in Regi area of Peshawar are raising slogans in favour of the Afghan Taliban.

The funeral was held on Friday night and its videos were shared widely on social media on Saturday. It can be seen in the video that the participants of the funeral are carrying the flags of ‘Islamic Emirates’ and chanting slogans in favour of Afghan Taliban. Some participants are also using the sound system in the video in which pro-Afghan Taliban songs are being played.

Peshawar Police have confirmed the development, and said action will be taken against the persons involved in the slogans after identifying them through the video. They said investigation into the video is underway.

The funeral was reportedly held late in the night in Regi area of Peshawar. Peshawar Police have sent an investigation team to the area and also informed the Khyber district police about the development.

The video shows that few people holding flags of the Islamic Emirates took part in the sloganeering and they were not blocking the road and allowing the vehicles to pass. The sloganeering was carried out near the Board Bazaar.

The incident has come at a time when Taliban militants have claimed significant gains in the war against the Afghan government after the withdrawal of the US troops.

At a press conference in Moscow, Taliban negotiator Shahabuddin Delawar claimed that 85 percent of Afghanistan´s territory is under the group´s control, including some 250 of the country´s 398 districts. The Taliban also claimed they had captured Afghanistan´s biggest border crossing with Iran.

In a positive development, the Taliban Friday said they would stop fighting if Doha talks succeed.