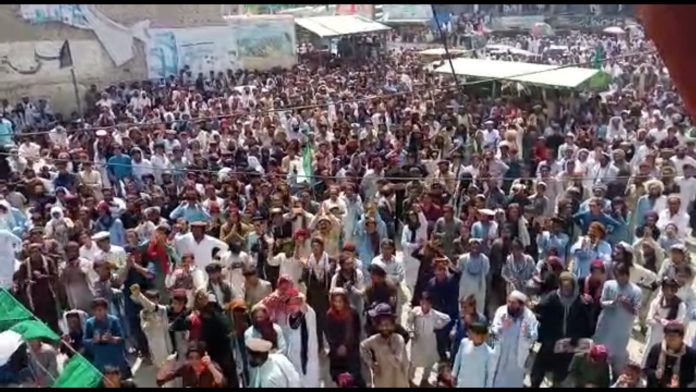 WANA: After section-144 was lifted, election candidates for PK-114 have staged massive political gatherings as a part of their election campaign in Wana. Speakers of the rallies demanded the government to release members of the national assembly Mohsin Dawar, Ali Wazir and other activists before the election.

Imran Mukhlis, a candidate of Pakistan People Party (PPP) for Pk-114 has staged a rally in Wana in which hundreds of people participated. The rally started from Rustam Bazar and passed through different markets in Wana Bazar. The election candidate while addressing informed the gathering of his party program for the uplift of tribal districts. He assured the rally participants that if he is elected, he will work for the provision of health, education other basic facilities of life to the constituency.

A similar rally was also carried out by the candidate of Awami National Party for PK-114 in which hundreds of people participated. The ANP leaders pledged to work for the uplift of tribal districts if he gets an elected in July 20 election.

Another rally carried out by Independent candidate for PK-114 Arif Wazir has also staged a massive rally in which several hundred people participated. The local people were of the view that it was the biggest political gathering ahead of July 20 election in Rustom Bazar. He also promised to provide the basic facilities of life to tribal district and raise voice for their issues on the floor of provincial assembly if he was voted in the upcoming elections.

Yesterday, the candidate of Jamiat-e-Ulema-e-Islam has also held a huge rally, however, the rally of independent candidate Arif Wazir is considered as the biggest one. the speakers of the rally demanded the government to release elected representatives of North Waziristan, Mohsin Dawar, Ali Wazir and other persons arrested after the Khar Kamar incident on April 26. The first-ever election for 16 seats of the provincial assembly is scheduled for July 20