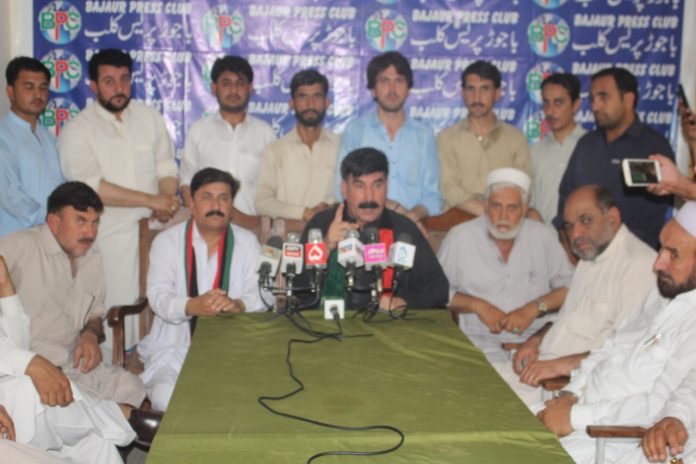 The provincial vice president of PPP Syed Akhuzada Chattan was addressing a press conference in Bajaur press club on Thursday. The PPP leader said that Bilawal Bhutto Zardari has been stopped from visiting Bajaur while Senator Siraj ul Haq, the head of Jamat-e-Islami was allowed and was visited parts of the district under security arrangements.

They alleged that the members of the national assembly of Pakistan Tehrik-e-Insaf (PTI) are visiting the political gatherings of their election candidates and are announcing developmental projects. He added that such steps influencing the election and are banned under the rules and regulation of the Election commission of Pakistan but there is no one to implement the rules.

He alleged that police and judges have been deployed in Bajaur but neither were provided with any offices nor their respective powers and authority by the government. Akhunzada Chattan announced that they will give a warm welcome to Bilawal on his visit to Munda on July 8.

PESHAWAR: Governor Khyber Pakhtunkhwa Shah Farman has directed Chief PESCO to immediately solve the electricity issue in the tribal district of Bajaur and ensure power supply from the Bajur Grid station to all areas of the district as per government subsidy.

He issued these directives after he was informed about the electricity crises in Bajur district by the Ex-Governor Khyber Pakhtunkhwa Engineer Shaukatullah Khan who called on him here at Governor House on Wednesday.

On this occasion, Governor Khyber Pakhtunkhwa Shah Farman while ensuring power supply in Bajaur district said that it is one of the incumbent government’s priorities to solve the issue of power outages and the present government has reduced load shedding in major areas of the province.