PESHAWAR: The soil of Khyber Pakhtunkhwa has produced many eminent musicians who have spread the message of peace and love throughout the word with their art.

Tabla Nawaz Ustad Wali Dad Khan was one such shining star of the Pashto music who had no match in the field. The compatriots and lovers of Ustad Wali Dad Khan say his magical touch was enough to steal the show at any music programme which he attended.

Eminent harmonium player Ustad Nazir Gul says Ustad Wali Dad had got fame in the country and abroad due to his particular heart-touching style of tabla playing. He said that in 70’s and 80’s, when the Pashto film industry was on its peak, the producers and directors had to wait for Ustad Wali Dad for three or four months to avail his services for their movies.

He recalled that eminent Pashto singer Gulnar Begum refused to sing songs without the music of Ustad Wali Dad as she believed that her music was incomplete without his tabla.

Ustad Wali Dad was born in Par Hoti area of Mardan in a music lovers’ family in 1949. He learned basic music from his father Faqir Dad. But he soon left his native area to learn the music and soon became a maestro in the art.

Senior cultural reporter Sher Alam Shinwari says Ustad Wali Dad performed in 25 countries of the world, including the US and Europe, and gained applause. He said Wali Dad was offered permanent stay in Europe and US, but he turned down these offers and stayed connected to the Pakhtun soil till his last breath.

The Pashto musicians and music lovers have termed the death of Wali Dad a great loss. 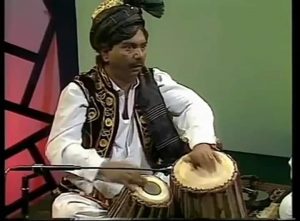 “The music of Ustad Wali Dad will be heard for ever, but many wouldn’t know that who produced this magical music,” says eminent literary figure Akbar Sial.

Nazir Gul says Wali Dad gave a new recognition to the art of table playing, by discovering new tunes and rhythms. He believes that Pashto music is incomplete without Wali Dad.

Ustad Wali Dad left this mortal world on Tuesday, 16 October, after protracted illness. His funeral prayer was held at the Ring Road which was attended by famous figures from the Pashto music industry. However, it was unfortunate that no government official or representative from the Culture Department attended the funeral. The figures associated with the Pashto music expressed disappointment over the fact that the government and other people ditch the artists whenever they fall ill or lose their lives.

Wali Dad was 10-year-old when he joined the field of music and he served in this field for 65 years. The deceased has four sons and three daughters. Two of his sons are also good musicians and aspire to follow their father. Nasir Dad is a tabla player, while Qaiser Dad is keyboard player.

The deceased was disappointed with the government for not conferring him any award despite the fact that his art was recognised world over.