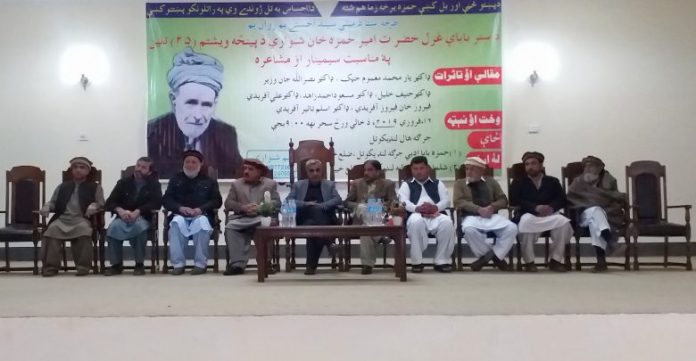 LANDI KOTAL: The 25th death anniversary of Amir Hamza Khan Shinwari, who is also known as Baba -e- Ghazal, was observed on Saturday.

A number of poets, researchers and intellectuals gathered at Jirga Hall, to pay tribute to his life and literary achievements at the event organised by Hamza Baba literary society and Shalman literary society.

Amir Hamza Khan Shinwar known by Pakhtuns as Hamza Baba, died on February 18, 1994. Coincidentally, his only son Murad Shinwari – who was also a renowned poet – died on the same date in 2012. Hamza Baba’s mausoleum is situated in Landikotal, Khyber district and has been recently renovated by the government.

Speaking on the occasion, Pashto writer Dr Yaar Muhammad Maghmom said that themes of his poetry are vast but are in plain words. He said that the mystical reveries, romanticism, however, it is the Paskhtun nationalism, like other Pashto poets, which is the main theme in his work. He added that his poetry stresses on Pukhtun nationalism and unity in the nation.

He said that unlike legendary Pashto poet Khushal Khan Khattak, Hamza Baba has produced a number of disciples, who has served the Pashto literature for generations. “Hamza Baba has made the ghazal so straightforward that a common man can grasp its message that was the reason that he was not only famous among the poets but also enjoying popularity among the common public,” said Maghmom

Professor Aslam Taseer while addressing the gathering said that Baba has introduced new and attractive terminologies in Pashto poetry which has increased the charm of his poetry. “After Hamza Baba, we were never able to find a poet of his stature.”  He said Hamza Baba followed the classical poetry of the past, blended it with the modern spirit and introduced new ideas into Pashto ghazals.