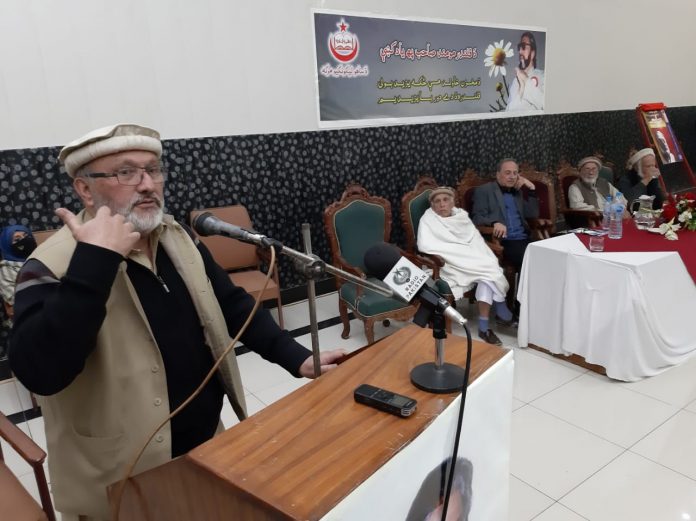 Scholars presented research papers on various aspects of life and services of the legendary poet who had contributed to more than one discipline of Pashto language and literature.  Born in 1930, his services acknowledged by the Government of Pakistan, which decorated him with the Pride of Performance, National Award for Democracy, and Sitara-e-Imtiaz.

Organizers also launched fourth edition of Qalandar Momand’s celebrated poetry volume ‘Sabawoon’. Asma Ikhlas a young girl from Malakand was the lone female poet who paid poetic tribute to Qalandar Momand. Momand was a close companion of Bacha Khan and suffered rigorous imprisonment due to his radical views and stood up in strong opposition to general Ayub Khan’s one unit policy.

He raised objections against anthology of Pashto titled ‘Pata Khazana’ (Hidden treasure) which is believed to be the first ever book of Pashto and earned worst criticism from stalwarts of Pashto literature. They termed Qalandar Momand as the Dr Johnson of Pashto literature because of his close similarity with English literary critic. He was a true spirit of the age, they added.

Being a trendsetter, Qalandar Momand gave a new dimension to Pashto poetry when he brought out his maiden poetry collection ‘Sabawoon’ way back in 1976. It was followed by his short collection ‘Gajray’. He found his own literary organization ‘Sahu Leekunkio Adabi Maraka’ in 1962 which produced many poets, scholars and literary critics.

0Qalandar Momand was still respected and considered a great source of inspiration by young literary circles.

Born and bred in Peshawar BazidKhel village, Qalandar Momand did master in English literature and joined teaching profession but was removed from the job owing to his political activities. He had mastery over English, Arabic, Persian, Hindi and Urdu and wrote about 19 books.  Momand also served as founding president of Peshawar Press club and used to contribute articles to different English, Urdu and Pashto newspapers and journals.