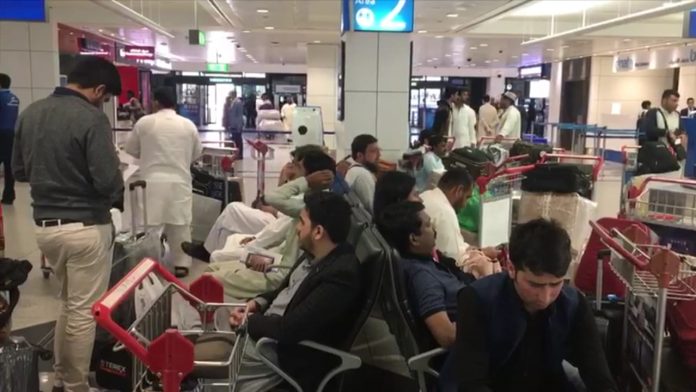 PESHAWAR: Hundreds of passengers suffered as a Peshawar-bound flight of the Pakistan International Airlines (PIA) from Abu Dhabi Airport was cancelled due to ongoing tension with India and subsequent closure of flight operation at Peshawar Airport.

Hundreds of passengers travelling from Abu Dhabi to Peshawar remained stranded at the airport due to cancellation of PK-284 flight of the PIA. The passengers complained of lack of any cooperation from the PIA staff due to which they were facing difficulties. Sources said the passengers asked the administration about the new timings and availability of the flight, but they were not given any information in this regard. The sources said the passengers lodged protest and insisted that all relevant information should be provided to them and arrangements should be made to take them to Peshawar.

Flight operations in several airports in Pakistan were suspended by the Civil Aviation Authority (CAA) after violation of Pakistani air space by the Indian war planes on Wednesday and subsequent action by the Pakistan Air Force (PAF) destroying two Indian aircraft and capturing one pilot.

Thousands of passengers were also stranded in Bangkok on Thursday when Thai Airways cancelled all flights over Pakistan, foreign media reported.

About 30 flights were initially affected due to the closure of Pakistani airspace for passenger flights. Three planes were forced to return to Bangkok and others were cancelled or set to be re-routed. Thai Airways said about 5,000 passengers had been caught up. Passengers were highly perturbed over the delays and lodged protest. Some passengers said they waited the whole day for clearance of their flights, but that did not happen. They also complained that they were not looked after by the airways or airport staff and they were short of food and did not take rest. Some of the stranded passengers from Europe also faced problems as no one understood their language and translators were not available at the airport.