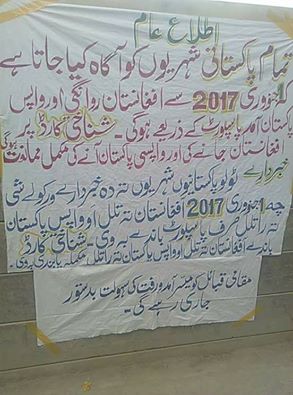 LANDI KOTAL, 05 December: Pakistani border authorities have made it mandatory for the citizens to travel to Afghanistan valid passport and visa from January 1 as the facility of entering and exiting at the Torkham border with simple computerized national identity card (CNIC) has been finished.

The border authorities have displayed banners and charts near the Torkham border informing the public that no one would be allowed to enter or exit through the border without a Pakistani passport.

According to officials of the Frontier Corps, the decision has been taken to discourage Afghan nationals travelling between Pakistan and Afghanistan on fake CNICs.

An official told TNN that fake Pakistani identity cards is a major issue confronted by the border authorities. The official informed that large number of Afghan nationals had obtained fake Pakistani cards and entering via Torkham border through these documents.

“It has been revealed that a gang of human smugglers have set up a sophisticated studio in Afghanistan where they prepare illegal Pakistani CNICs and provide it to Afghan citizens for Rs4000 to Rs8000. Unfortunately, we have no facility of Nadra at the border which can verify the identity cards,” the official said.

Another source confided to this correspondent that the intelligence establishment had expressed reservations over the cross border movement of Pakistani nationals on simple identity cards and that was why passport and visa had been made mandatory for trans-border travelling.