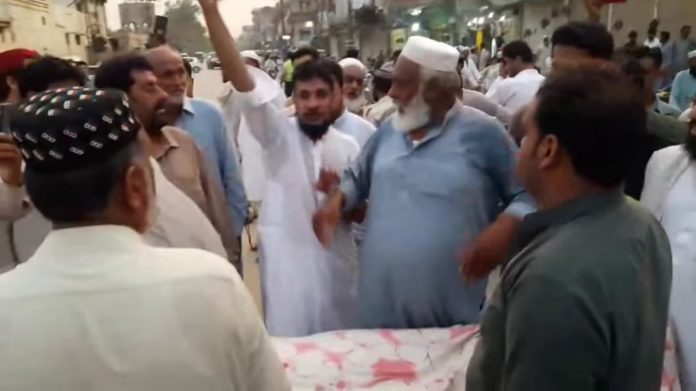 DI KHAN: scores of people on Saturday gathered outside District Headquarter Hospital Dera Ismail Khan protesting the ‘indifferent attitude’ and ‘neglect’ of healthcare staff which allegedly caused the death of a citizen.

The protestors while placing the dead body on the road demanded prompt action against the doctors responsible for the death.

Relative of the deceased said media a patient was brought with emergency to Trauma Center of the District Headquarter Hospital on Saturday. “The doctors and concerned staff allegedly treated patient with irrelevant medication which allegedly aggravated his condition,” accused the protestors.

The deceased Muhammad Munir was a Grade-18 serving official in the local Education Department. The relatives blamed that despite they repeatedly approached the establishment staff no specialist or doctor took stock of the emergency.

The relatives of the deceased strongly deplored the casualty and blamed the health care staff for the death of the citizen. The protestors blocked the road and raised slogans against the alleged neglect and demanded immediate action against the responsible ones.

The local administration while taking notice of the situation assured the protesters that the people responsible for the ‘sordid state of affairs’ would be met with prompt action. The charged people later dispersed peacefully.

DI KHAN: A teenage boy was crushed to death when his motorbike skidded off the road and rammed into a truck coming from the opposite side on Saturday police said.

According to police and hospital sources, Muhammad Suleman resident of Pharpur town along with his friends was riding a motorcycle on one wheel on Chashma Road. The report said that he lost his control on the bike and ran into a truck which was coming from the opposite direction near Dhalla Morh. The report said that the boy died on the spot.

The police said that the driver of the truck escaped the accident scene. However, the police took the vehicle into their custody and registered the case for further investigation.