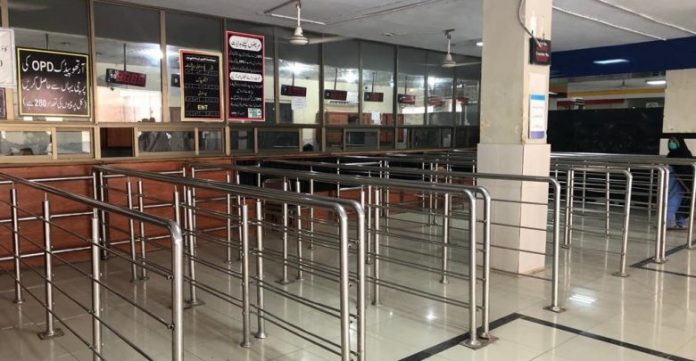 PESHAWAR: Patients are suffering as they are not able to get proper treatment due to doctors’ Grand Health Alliance strike across Khyber Pakhtunkhwa (KP) including the provincial capital Peshawar.

The Health Employees’ strike from Khyber to Bajaur and Chitral to Dera Ismail Khan is continuing for continued for 19th-day due which all health services, except emergency services, are suspended in hospitals in KP.

Due to the government’s inability to deal with the striking doctors and make emergency plan to treat patients in hospitals, routine check-ups, besides emergency, at Lady Reading Hospital (LRH), Khyber Teaching Hospital and Hayatabad Medical Complex in Peshawar are completely closed due to which patients are suffering and forced to find alternative ways.

Likewise, elective services have been completely shut down due to the strike in all district headquarters, basic health units and Medical Teaching Institutes hospitals. Doctors and paramedical staff are not ready to withdraw from their demands, and now they have boycotted the campaign to eradicate polio and dengue, as well as the provincial government, has taken a tough approach.

Last week, KP special secretary health has said the provincial government to recruit 400 doctors on ad-hoc bases to cope with the situation created due to protests of doctors against new health policy. The health secretary announced that within a few days, posts will be advertised through national dailies to provide immediate to patients against situation created due to doctor’s strike.

Due to the urgency of the matter, the Peshawar High Court (PHC) had constituted a special bench to hear the case relating to doctors protests and KP governments’ newly health policy. In its judgment, the Court has directed the government to release all the arrested doctors and ordered doctors to resume their duties. Though the arrested doctors have been released, however, they are still in protest and have not yet started their duties in hospitals.