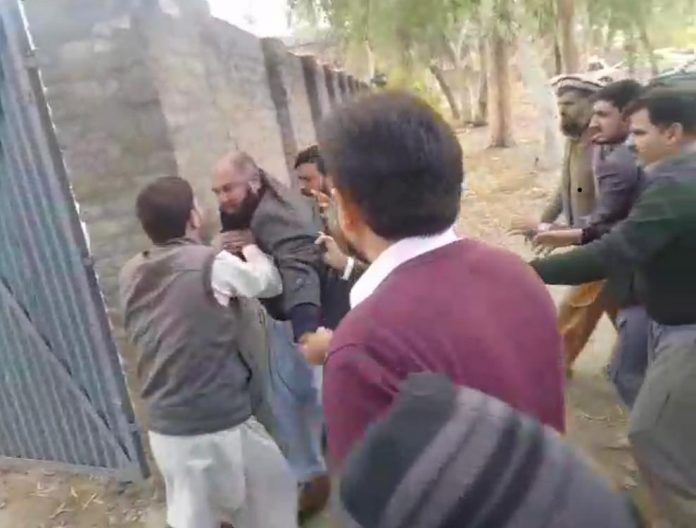 NOWSHERA: Anti Corruption department Police and revenue clerks clashed with each other when Anti-corruption team raided the office of Patwari in Akbar Pura and allegedly arrested a patwari while taking bribe from a person.

Local sources said that Anti Corruption Sub-inspector Hidayat Shah was informed that the revenue clerks, who were working in Akbar Pura Patwar Khana are taking bribe from the people while dealing with routine cases of land transfer.

Acting upon the information sub-inspector Hidayat Shah raided the office of Patwari known as Johar but the Patwari with the help of other revenue clerks tortured the inspector inside Patwari office. The whole accident was also filmed on mobile phone camera that circulated on social media throughout the day

Registering an FIR Sub-inspector Hidayat Shah said that they recovered tinted copies of money from the Patwari after a complaint of the citizen, however, the entire staff and Patwari association started torturing him along with other staff of the anti-corruption department.

He said that one of the Revenue Tehsildar, Mr Zahid Khan is also involved in this matter and they are allegedly taking bribes for the legal process of land transfer. Shah said that it was their responsibility to raid any office against whom they receive public complaints. Shah in his FIR said that he was also accompanied by a civil judge but unfortunately no one was spared and all of them were harassed inside the Patwar office of Akbar Pura.

The anti-corruption team registered the First Information Report against the Patwari under various section of the Pakistan Penal Code. Several Patwaris including Gardawar and other persons involved in the torture were arrested on the spot.

It is to mention here that a few months ago a Patwari Mohibullah was arrested red-handed when a civil judge and police raided his office. The corruption of Patwaris in the revenue department is a matter of grave concern and despite the claim of the PTI government, not reforms were made in the department.